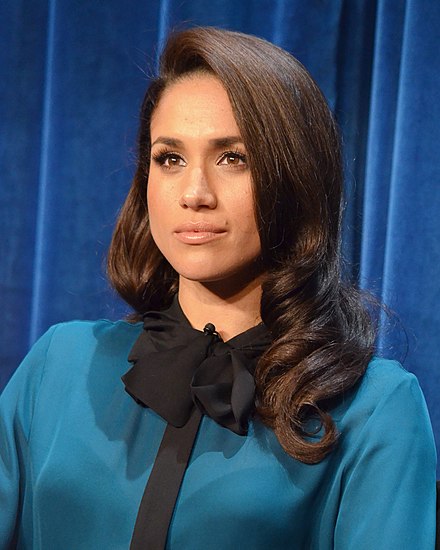 Congratulations to Prince Harry and Meghan Markle on their marriage announcement.

Much discussion will be had about Markle's parentage:  a white father and a black mother.  The black mother looks to be a little on the lighter side, leaving Meghan herself (pictured right) looking like a white woman with a good tan.

Great excitement will be expressed about how neat-o this is, with a black woman joining the Royal Family, what an open-minded bro Harry is, how the times they are a-changin', how love is colorblind, etc.

Oh, and how maybe we should put plans to eliminate the monarchy on hold, since it's proven that it can join the new multicultural era.

But I remain skeptical of interracial relationships, particularly black-white ones.  For every Meghan Markle situation, I see black males who impregnate white women, beat or kill them, or abandon them.

The CDC estimates that interracial marriages are more likely to end in divorce:  41 percent to 31 percent for same-race couples.  So it was for Thomas Markle and Doria Raglan (or Ragland)—they divorced when Meghan was six.

Rates of violence in black-white marriages—typically where the husband is black and the wife is white—are far higher than in same-race marriages, and a white woman increases her risk of being killed by 12 times when she marries a black man.[ Happy Endings: Interracial Couples on Television  Matthew McGregor, American Renaissance, October 1, 2013]

And yet, since Guess Who's Coming to Dinner, Hollywood has consistently promoted interracial marriage as the pinnacle of goodness.  Just the other day, the otherwise-nice movie  Wonder subjected moviegoers to the cool, sensitive black kid putting the moves on the white girl.

Movies are never required to provide the actual statistics.