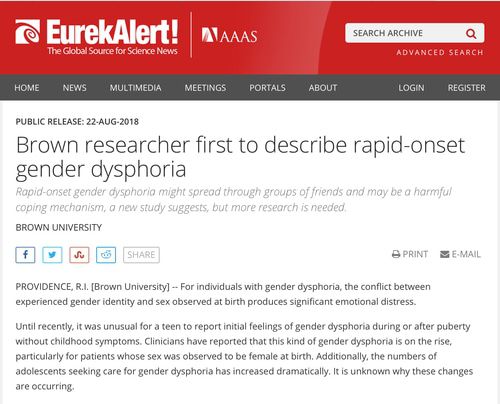 Is Transgenderism the New Anorexia?

I once stayed for a few weeks in an apartment complex in the Boston area that had a large number of well-dressed but extremely skinny teenaged girls with supercilious expressions. I finally figured out that one floor of the building was home to a residential treatment center for anorexia.

Anorexia in modern America is a mental illness found mostly in affluent, very competitive females who come from social environments where being fat is a symptom of deplorability. The girls tend to internalize their culture’s and their moms’ prejudice against weight to the point where they are in danger of starving to death.

They look in the mirror at their 85 pound selves and just see FATNESS.

[Deleted, above is an Archive.org link]

Rapid-onset gender dysphoria might spread through groups of friends and may be a harmful coping mechanism, a new study suggests, but more research is needed.

PROVIDENCE, R.I. [Brown University] — For individuals with gender dysphoria, the conflict between experienced gender identity and sex observed at birth produces significant emotional distress. Until recently, it was unusual for a teen to report initial feelings of gender dysphoria during or after puberty without childhood symptoms.

Clinicians have reported that this kind of gender dysphoria is on the rise, particularly for patients whose sex was observed to be female at birth. Additionally, the numbers of adolescents seeking care for gender dysphoria has increased dramatically. It is unknown why these changes are occurring.

This month, a Brown University researcher published the first study to empirically describe teens and young adults who did not have symptoms of gender dysphoria during childhood but who were observed by their parents to rapidly develop gender dysphoria symptoms over days, weeks or months during or after puberty.

“This kind of descriptive study is important because it defines a group and raises questions for more research,” said study author Lisa Littman, an assistant professor of the practice of behavioral and social sciences at Brown’s School of Public Health. …

Linda Littman is a brave woman. A lot of the transgender mania of the last few years appears to be driven by the parents of unattractive children who accept whatever their kids, usually their daughters, tell them at face value.

The study was published on Aug. 16 in PLOS ONE. Littman surveyed more than 250 parents of children who suddenly developed gender dysphoria symptoms during or after puberty. She said she wanted to better understand the phenomenon, which seems to be on the rise, but had been considered atypical even just a few years ago. …

The children of the parents surveyed were more than 80 percent female at birth and ranged between 11 and 27 years old at the time of survey, with an average age of 16. Additionally, 47 percent of the children were reported as academically gifted, and 41 percent expressed a non-heterosexual sexual orientation prior to their gender dysphoria symptoms. Most of the parent respondents were female, white and U.S. residents.

In the 90-question survey, Littman asked the parents about each of the eight indicators for gender dysphoria in childhood that are detailed by the American Psychiatric Association. To meet the diagnostic criteria for gender dysphoria in childhood, a child needs to experience at least six of the eight indicators. Most include readily observable signs, such as a strong rejection of typically feminine or masculine toys and games, and strong resistance to wearing typically feminine or masculine clothes.

I’ve known since he was a little boy a fellow who now is heavy into being a drag queen. This is no surprise since he was a drag princess as a 3 year old. As a little boy, he just loved girls’ toys and girls’ clothes. That’s who he is and has always been.

But recently our society has seen a whole lot of moody 14 year old girls who were normal 8 year old girls suddenly tell their parents that they’ve always been a boy on the inside.

Eighty percent of the parents reported observing none of these indicators in their children before puberty.

If I’m interpreting this correctly, 66% of parents reported that their child had one or more friends who became transgender-identified around the same time their child did.

The pattern of clusters of teens in friend groups becoming transgender-identified, the group dynamics of these friend groups and the types of advice viewed online led her to the hypothesis that friends and online sources could spread certain beliefs.

Examples include the belief that non-specific symptoms such as feeling uncomfortable in their own skins or feeling like they don’t fit in– which could be a part of normal puberty or associated with trauma — should be perceived as gender dysphoria; the belief that the only path to happiness is transition; and the belief that anyone who disagrees with the teen is transphobic and should be cut out of their life.

I bet anorexic girls have a similar tendency to have anorexia prone friends.

Additionally, 62 percent of parents reported their teen or young adult had one or more diagnoses of a psychiatric disorder or neurodevelopmental disability before the onset of gender dysphoria. Forty-eight percent reported that their child had experienced a traumatic or stressful event prior to the onset of their gender dysphoria, including being bullied, sexually assaulted or having their parents get divorced.

Perhaps in 1990, these poor girls would have responded to their parents’ divorce by becoming Goths and dressing like Robert Smith of The Cure. But now transgenderism is the solution for the adolescent blues that is recommended by our society and is picked up on by conformist teenage girls

This suggests that the drive to transition expressed by these teens and young adults could be a harmful coping mechanism like drugs, alcohol or cutting, Littman said. …

Perhaps transgenderism is the flip side of anorexia. The girls who are naturally skinny and competitive about being beautiful are in danger of going crazy in a manner in which they starve themselves because they think that will make them more attractive to boys than the other girls.

Fortunately, our society has realized that this is a bad thing and tries to discourage these girls.

On the other hand, perhaps the girls who feel like they don’t have what it takes to compete with the pretty, slender, potentially anorexic girls now are encouraged by our culture to give up and suddenly declare themselves to be boys and demand drugs and surgery.

Unfortunately, our society hasn’t yet realized that this is a bad thing and our society continues to encourage these poor girls to have themselves expensively mutilated.