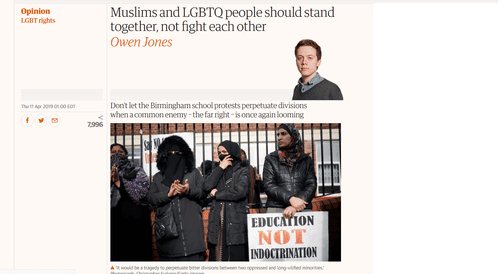 Muslims and LGBTQ people should stand together, not fight each other

Watching angry protesters waving placards outside a Birmingham primary school brought it all back for Khakan Qureshi. A softly spoken gay Muslim in his early 40s, he vividly remembers Margaret Thatcher denouncing the fact that children were being taught they “have an inalienable right to be gay” and introducing section 28 – the toxic product of Tory homophobia and a hysterical media moral panic – to prevent the so-called promotion of homosexuality in schools. Now, in 2019, picketers – mostly, but not exclusively, from a Muslim background – are demanding that schools cease their LGBTQ-inclusive education. “I feel sad that I had to experience all that sort of mental angst all those years, being bullied, being picked on, being mocked,” he told me. “I just think that children should be allowed to be who they are, let us be who we are, let Muslims be who they are.”

When everybody knows that the AIDS Epidemic was actually caused by Nancy Reagan.

The damage inflicted on LGBTQ people was incalculable: hearing homophobic language casually thrown around in the playground, absorbing the homophobia peddled by much of the media, fearful of rejection from family and friends, and no one to tell you you’re not alone, that there’s nothing wrong with you. …

The dangerous conclusion to draw from this saga is that Muslims and LGBTQ people are on a collision course. … But in truth, LGBTQ people and Muslims should be allies: above all, because we share many of the same experiences and enemies. …

• Owen Jones is a Guardian columnist