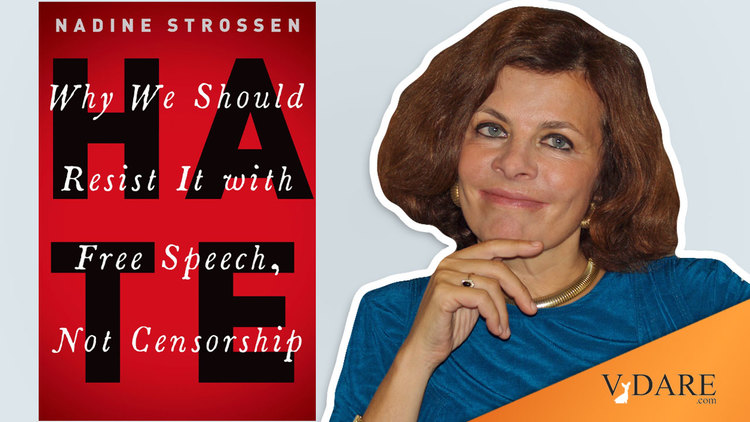 ANN COULTER: “Sorry I Murdered You With My ‘Hate Speech’”

Earlier: Have At ’Em, Antifa! The New Free Speech—Ann Coulter On VDARE Vs. Colorado Springs

It’s not every day that I praise a book by the former head of the American Civil Liberties Union, let alone the longest-serving president of that organization.

But I was delighted to have Nadine Strossen on my Substack recently to talk about her book, HATE: Why We Should Resist It With Free Speech, Not Censorship—and not just because I am one of America’s leading “hate speakers.” (Oh settle down, girls. That’s according to woke college liberals, the only humans more infantile and narcissistic than Donald Trump.)

Her book is a thoroughgoing, no-holds barred defense of free speech. This makes her the rarest of creatures: a principled liberal. We should get her DNA in a lab and study it.

Being a liberal herself, Strossen pitches her argument to the left. That's fortunate, I’d say: These days, the most enthusiastic advocates for censorship are liberals.

Thus, she repeatedly notes that censorship has historically been used by the powerful to crush the “marginalized.”

I couldn’t agree more! On the other hand, the two of us have very different ideas about who’s “marginalized.” Strossen means feminists, gays, Muslims, blacks, Hispanics, immigrants, transgenders, nonbinaries, and so on, whereas I mean everybody else, to wit: “cisgendered” white Americans.

Not a certified victim? Don’t even think of applying to Harvard, Princeton or Yale —unless you’ve made a spectacle of yourself carrying on about gun control. Don’t be funny, use hyperbole or engage in any conversation at all with bratty East Coast private-school kids on a college resume-building trip to Peru. (See Pulitzer Prize-winning science reporter Donald McNeil, fired by The New York Times for this reckless error.)

Every time I’d read a description of this or that “hate speech” ban in Strossen’s book, what leapt to mind wasn’t someone saying only women have two X chromosomes, but the nonstop venom that is directed at white people.

“Hate speech” has been defined as expression that is:

How do you think it would go over if I wrote books with titles like: “Black Fragility,” “Dear Black People” and “The White Friend: On Being a Better Black Person.” 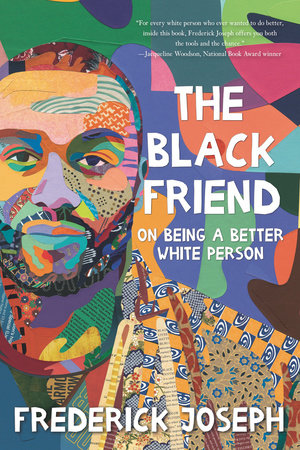 My guess is, not very well. And yet the Priests of High Culture at the Times have effusively—and repeatedly—praised books titled White Fragility, Dear White People and The Black Friend: On Being a Better White Person.

These, and dozens more with similar titles—“My Beautiful Black Hair,” “Why I'm No Longer Talking to White People About Race” and “Black Girl Magic” and on and on and on—do not bring their authors into disrepute. To the contrary, they are rewarded with instant fame, unbridled praise and immense wealth. (Naturally, their books are assigned reading in college courses throughout the nation.)

Is all this loathing for white people simply the cry of the powerless against the powerful?

Here’s some power for you: At least since 1973, when Allan Bakke was rejected from the University of California Medical School at Davis with grades and scores that would have won him a fast-track admission had he been black, white Americans have been openly and aggressively discriminated against by the government—and with even greater zeal by corporate America.

White people, if I may call you that, you suck at oppression.

Making both my point and hers, Strossen says that wherever hate speech laws have been tried, it’s the “marginalized”—not the “oppressors”—who get nailed.

Duh. People who think it’s cool to publish books with titles like Why I’m No Longer Talking to White People About Race don’t exactly exude sweetness and light when talking to actual white people.

Thanks to the University of Michigan being forced to release documents in response to an ACLU lawsuit challenging its “hate speech” code in the late 1980s, Strossen reveals that, during the brief time it was in effect, more than 20 cases were brought against black people for racist speech.

The “irony” of hate speech laws being applied to the people who engage in most of the hate speech has led law professor Charles Lawrence to argue for “hate speech” codes that would apply only to those “in dominant majority groups,” i.e., white people.

See? To me, that sounds like the rule of an “oppressor.”

But like Strossen, I believe in free speech. It’s not the “hate speech” that bothers me: it’s the physical violence and intentional race discrimination against white Americans that’s beginning to get on my nerves.