Ann Coulter: How To Talk To Your Children About Elizabeth Warren

Earlier, by Audacious Epigone: Liberal Ladies Are The Real Misogynists—They Sure Didn't Vote For Elizabeth Warren!

I see something darker. I see the ugly heart that beats beneath our supposed “democracy.” Frankly, I’m afraid.

Warren’s exit from the race is Brett Kavanaugh’s sneering grimace as he attempted to rape and murder Christine Blasey Ford [editor's note: allegedly]; it is the smirks on the faces of those fascist 14-year-old anti-choice fanatics from Covington, Kentucky; it is our president constantly raping every woman in sight.

To my children, I say, you will be OK. I won’t sugarcoat it—this is truly horrible. But once we have recovered from this devastating blow, life will go on. You will put one foot in front of the other and ...

OH! IS LIFE EVEN WORTH LIVING ANYMORE??? 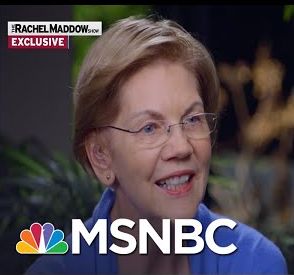 I know all women across America agree with me. After Warren dropped out, MSNBC’s Lawrence O’Donnell [Tweet him] ran “Portraits of Grief” on his nightly show, featuring some of the victims of her failed bid. Rachel Maddow raced to Massachusetts for an exclusive interview with the heroine herself.

And the New York Times published a piece by Sarah Smarsh [Tweet her] titled, “I Am Burning With Fury and Grief Over Elizabeth Warren. And I Am Not Alone.”

Let me remind you, the Times is the “Newspaper of Record.”

Some say Smarsh’s op-ed reads like a parody of sexist stereotypes—emotional, childlike, devoid of logic. I say she has proved beyond cavil that Warren’s defeat is an American holocaust.

FACT: “When Hillary Clinton lost in 2016, it hurt in similar ways ... [t]his election, though, I thought Senator Elizabeth Warren ... might go to the White House.”

FACT: “[M]y father and maternal grandmother were talking politics at my kitchen table in Kansas. ‘This is the best chance that a woman has ever had to become the president,’ said my dad ... ‘Now. It’s now.’”

You wonder whether there is a crisis of sexism in America? There you have it, in black and white.

Nevertheless, Smarsh persisted! Although I think her argument was already water-tight, she also went to the beach and read a novel. And guess what she read? A fictional account of the oppression of women in Colonial Massachusetts!

(We can disregard the near-contemporaneous observations of Alexis de Tocqueville: He was a man. Of course, that’s what he’d say.)

In truth, I don’t believe any of this. I think Smarsh’s ramblings could have been written by a 7-year-old.

Her op-ed does, however, illustrate three points:

1) The perniciousness of participation trophies.

When I was a kid, you got a trophy for winning. Now you get a trophy for showing up. The Participation Trophy phenomenon always struck many of us as wrong and aesthetically displeasing. We wondered what would become of children raised in an “Everybody Gets an ‘A’” culture.

Smarsh’s op-ed is the answer. Entire generations of birdbrains expect a trophy when their candidate runs.

2) The mistake we make as a society in sanctifying tantrums.

Whether it’s a Yale co-ed screaming in the face of a faculty member, hurling insults at him over Halloween costumes, or antifa thugs running around in masks smashing things because a conservative speaker is in the vicinity, the lesson to generations of young people has been: Stamping your feet and throwing things will NOT be a wasted effort.

At the risk of hopelessly confusing Brian Williams and Mara Gay, here are some interesting numbers: At least 60% of Democratic votes come from women, according to estimates by Pew and CNN. (This figure isn’t widely advertised: Democrats don’t want people to realize that they are a party of women.)

Warren was rejected by liberal women.

She was also resoundingly nixed by African Americans and Hispanics. Even her bete noire, Michael Bloomberg, beat Warren among black and Hispanic voters.

(Of course, Bloomberg’s shellacking of Warren at the polls must be balanced against Smarsh’s conclusion about Warren “thoroughly winning” the debate where she bashed Bloomberg.)

Mystified by empirical evidence, liberal women think their personal narratives make fascinating reading. After all, it’s about THEM! How do I know Trump is a monster? I’ve gained 20 pounds since his election! Their op-eds should begin, “Dear Diary.”

In lieu of facts, they fill up their columns with pabulum. Smarsh heard two drunks screaming at the kitchen table—as she put it, "alcohol was involved"—and rushed to hit the “record” button. This is gold!