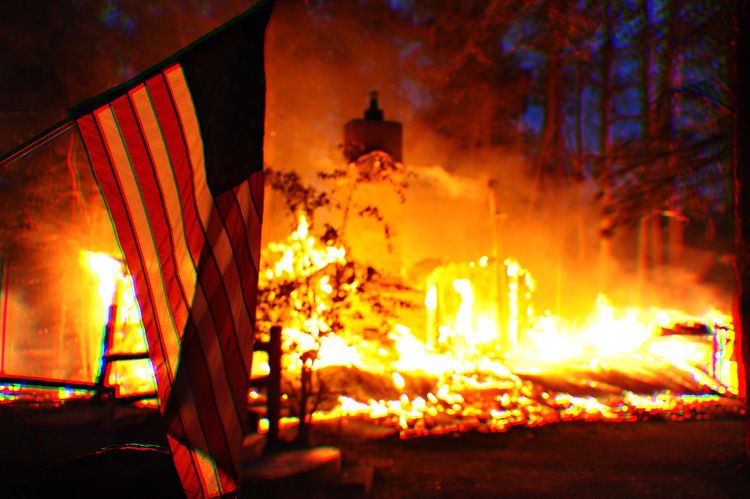 See, earlier, by Peter Brimelow: “It Will Come To Blood”–Reflections On The Left’s Anti-Trump Inauguration Tantrum,  January 22, 2017

I will not be in much of a celebratory mood this coming Independence Day.

Our borders have collapsed. Our educational system is a wreck. And our constitutionally protected freedoms of assembly, speech and the press are under siege in the streets and across the internet. The ability of patriots to warn, expose and combat the threats to our national sovereignty is eroding daily.

Sorry to be a wet blanket, my fellow Americans, but this is no time for a parade.

In Portland, my young journalist friend Andy Ngo was hospitalized over the weekend after a brutal assault at the hands of Antifa thugs who rule the streets and run the city. Ngo has been smeared as a "provocateur" and a "propagandist" for exposing the bloody violence and anarchy of far-left "resisters." He has been doxxed and physically threatened by anti-Trump, open borders radicals menacing him online. On Saturday afternoon, armed only with his smartphone, hand-held GoPro, bodycam and reporter's backpack, Ngo braved a mob of black-masked agitators purportedly marching against "hate."

As they passed the county courthouse and sheriff's office, the anarchists taunted Ngo by name and hurled cups with unknown substances at him. One violent attacker dressed like a ninja, donning black gloves with reinforced knuckles, punched Ngo in the eyes. Another black-cloaked punk kicked Ngo in the groin multiple times as others pelted him with liquids, sprays and eggs. During the melee, as police stood by, his electronic equipment was stolen. He sustained brain bleeding and wounds to his head, face and neck.

Ngo was not alone. Two Oregonians who had come to support conservative speakers at a downtown rally nearby were set upon by black-masked vigilantes. Adam Kelly was hit in the head with fists, nunchucks, a metal Hydro Flask and a crowbar. Two massive gashes on his skull required more than 25 staples. John Blum was also overrun by people in black masks, who aimed bear spray or mace at him when he, Kelly and two others tried to come to the aid of others being assaulted by Antifa. The elderly Blum had carried a baton to defend himself, but was blinded and incapacitated while being hit, punched and dragged across the street with blood pouring down his face.

Antifa's apologists in the liberal press scoffed at the savagery, mocking Ngo as a "f---ing snowflake" and downplaying the gang ambushes harmless "milkshaking." In total, medics treated eight people, including three police officers. "Three community members received treatment at area hospitals after they were assaulted with weapons. Two officers were pepper sprayed during the incident and were treated. Another officer was punched in the arm by a demonstrator and sustained (a) non-life-threatening injury. Another officer sustained a non-life-threatening head injury from a projectile," the city blandly reported.

Democratic Mayor Ted Wheeler, a notorious social justice grandstander, spent Monday railing not against the barbarians who've hijacked the public square in his town, but against Texas GOP Sen. Ted Cruz, who called out Wheeler's history of stand-down orders. Portland Police Association president Daryl Turner amplified the critique, pleading with the City to "remove the handcuffs from our officers and let them stop the violence through strong and swift enforcement action." Those handcuffs have endangered Portland's citizens in multiple ways. Wheeler has declared Portland a sanctuary city for illegal immigrants, and himself a guardian against all foreign criminals evading deportation. In February, the city withdrew the police force from the Joint Terrorism Task Force's partnership between the feds and local law enforcement—turning the Pacific Northwest metropolis into a safe space for jihad.

Will there be a federal investigation? Concerned citizens who can't afford to wait have taken matters into their own hands. After just three days, more than 5,700 individuals have contributed a whopping $178,000 to a GoFundMe campaign I spearheaded to help with Andy Ngo's security, medical and work costs. A separate fundraiser for Adam Kelly raised more than $11,000. On another front, internet sleuths are analyzing video to try and identify Antifa assailants—crowdsourcing the job Portland officials have failed to do.

But the social media battlegrounds, like the streets, are rigged against the law-abiding.

One Twitter user, LucetVeritas, who posted video of Portland violence this weekend, disappeared from the site on Monday. I was able to track her down. She told me that her tweet "had millions of impressions and almost 12,000 retweets. Within 24 hours, Twitter suspended my account offering no explanation. As an avid researcher, I have witnessed bias by employees of Twitter who were tied to Antifa accounts. Jack Dorsey himself has admitted his own conservative employees do not feel safe to express their opinions. Our First Amendment right of freedom of speech is in danger more now than ever before."

Just minutes after finishing up my conversation with her, I learned that another researcher and investigator I've admired for years, Ann Corcoran, had her invaluable 12-year-old website, Refugee Resettlement Watch, terminated by WordPress this week. Poof. Gone. [VDARE.com note: Archive.org link to 12 years of RRW here.]

With patriots being silenced all around me, it's getting harder to feel patriotic. Who needs fireworks when our rights are going up in flames?