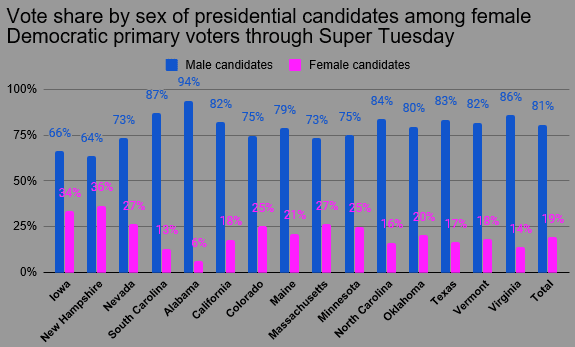 Liberal Ladies Are The Real Misogynists—They Sure Didn't Vote For Elizabeth Warren!

Elizabeth Warren on how sexism sunk her campaign (just listen for eight seconds):

Warren: “If you say, 'No, there was no sexism,' about a bazillion women think, 'What planet do you live on?'”

A bazillion, huh? Among women who participated in a Democrat primary or caucus through Super Tuesday, more than 4-in-5 voted for a man, while fewer than 1-in-5 voted for a woman. There is not a single state where anything close to a majority of Democrat women put their support behind a Democrat woman running for president,* despite there having been several of them to choose from: 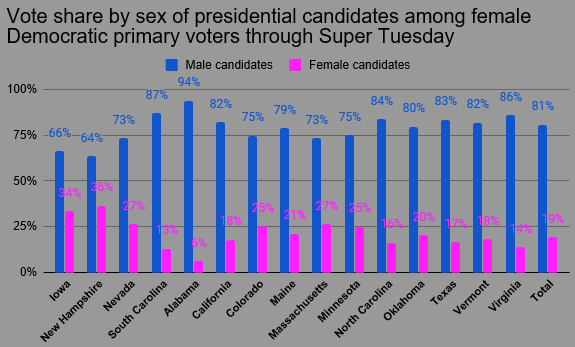 There is one female candidate remaining yet to suspend her campaign. By Democrat party rules established before the election season began, she is eligible to participate in the next debate, which is scheduled to take place on the Ides of March. We’ll be looking forward to Warren vociferously demanding said woman not be shut out. For her to be shut out, the party must stick to the arbitrary last minute rule change that has been made to restrict the debate to a pair of old white men.

Bernie Sanders will surely call on the DNC to follow its own rules and allow the woman to participate as well. She’s had his back time and time again when virtually no one else in the party has, and he has assured and reassured us that he is not a sexist himself. This will be a great opportunity for him to prove it.

Sardonicism off, it wouldn’t be a bad move for Joe Biden to call for Tulsi Gabbard to be allowed in. Anything Biden is able to do to reduce the amount of time he has to speak in a debate is good for him.

This would put Bernie Sanders in a tough spot. On principle and on account of all Gabbard has done for him, he should call for her inclusion. But her participation is tactically disastrous, since she’ll reduce both his and Biden’s speaking times and, to the extent that she is able to steal any votes from the two of them, they will primarily come from Sanders’ anti-war flank.

Fortunately for Sanders, the DNC isn’t going to allow her on the stage no matter what Biden or Sanders say. The last thing the War Party wants to hear is the phrase “regime-change wars” again.

* Exit polling was not conducted in Utah or Arkansas. Figures for the Super Tuesday states that still had yet to report full results at the time of this posting were extrapolated from the results that have been reported up to this point.