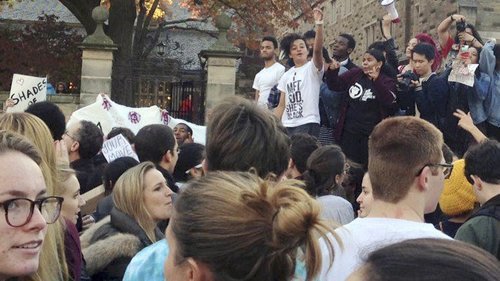 Hundreds march at Yale in solidarity with minority students

By Isaac Stanley-Becker November 9 at 7:54 PM

NEW HAVEN, CONN. — A crowd of hundreds stopped traffic on city streets surrounding the Yale University campus Monday in a march to show solidarity with minority students who say they are barred from full participation at the Ivy League school. …

“What I said on Thursday is if there are students who don’t feel welcome here, we need to accept that as an area where we can do better,” Salovey said in a brief interview. “And we must do better.”

Salovey pledged at the end of last week to unveil a series next steps before Thanksgiving in a university-wide effort to improve the experiences of students of color. He said that might come through “formal committee processes” but also extensive “informal interactions.”

“People really have to feel like they can express themselves, whatever their views are, in an environment that is open to them,” he said.

That question — of the right to free expression — has come into sharp focus in Silliman College, one of Yale’s 12 residential communities, which has been a focus of the racial tensions here. Nicholas Christakis, the Silliman master at the center of a campus debate over speech and sensitivity, spoke with students on Sunday in the living room of his home at the college.

Christakis apologized for his role in a controversy that erupted the day before Halloween when his wife, Erika Christakis, the associate master at Silliman, challenged a campus-wide request that students be sensitive when considering costumes that could be offensive. An early childhood educator, she advised Silliman students either to “look away” or to voice their discomfort, counsel that drew a sharp rebuke from minority students. The pair defended the e-mail on social media last week, suggesting that the uproar was emblematic of “campus censorship culture.”

“I have disappointed you and I’m really sorry,” Nicholas Christakis told about 100 students gathered in his living room on Sunday for a meeting also attended by Jonathan Holloway, the dean of Yale College, and other university administrators. Christakis said his encounter on Thursday with students in the college’s courtyard, in which numerous black women upbraided him for being inattentive to them, broke his heart, according to a voice recording of the conversation provided to The Washington Post.

“I mean it just broke my heart,” Christakis said. “I thought that I had some credibility with you, you know? I care so much about the same issues you care about. I’ve spent my life taking care of these issues of injustice, of poverty, of racism. I have the same beliefs that you do … I’m genuinely sorry, and to have disappointed you. I’ve disappointed myself.”

Hasn’t anybody learned anything from Donald Trump? When you are in the right, never apologize.

Christiakis, by the way, is a superstar with tenure, an endowed chair, and is a professor in two separate departments. From Wikipedia:

From 2009 to 2013, Christakis and his wife, Erika Christakis, were Co-Masters of Pforzheimer House, one of Harvard’s twelve residential houses.[4] In February 2015, it was announced that Christakis would become the new master of Silliman College at Yale University, perhaps the first person to serve in this role at both Yale and Harvard.[5]

He was elected to the Institute of Medicine of the National Academy of Sciences in 2006, and he was named a Fellow at the American Association for the Advancement of Science in 2010. …

Christakis has practiced as a home hospice physician, taking care of home-bound, dying patients. In Boston, from 2002 to 2006, Christakis worked as an attending physician on the Palliative Medicine Consult Service at Massachusetts General Hospital. In 2006, he moved to Mount Auburn Hospital, and in 2013, he moved to the Department of Medicine at Yale University.

If you are wondering what “master of Silliman College” means, I can explain because Rice U. has the same set-up. A “college” at Rice or Yale, or a “house” at Harvard, is a dormitory that is more of a long-lasting community than the typical dormitory that students shuffle in and out of. It’s like a randomly chosen fraternity house. At Rice, I spent all four years living in Sid Richardson College, one of eight dorms with its own dining hall. The food was pretty awful (Rice back then had a central kitchen and trucked the meals around to the eight dining halls), but eating all your meals with the same 250 people builds a sense of esprit de corps (perhaps especially if the food is as bad as it was at Rice).

A professor is hired to be the “master” of the college and moves into an adjoining house, with his or her spouse being the associate master. At Sid Rich, our master was Bill Martin, Rice’s superstar professor (he was always being interviewed on 60 Minutes and the like). Professor Martin is just about the world’s greatest guy, so he was always dreaming up favors to do for me, like getting me invited to dinner with visiting big shots.

I’ve often wondered why this “college” system hasn’t spread to more universities, since it’s a nice blend between dorm and frat living. But maybe one reason is that rare individuals of the caliber of a Christiakis or a Martin have a lot better things to do with their lives than getting screeched at by overgrown adolescents.