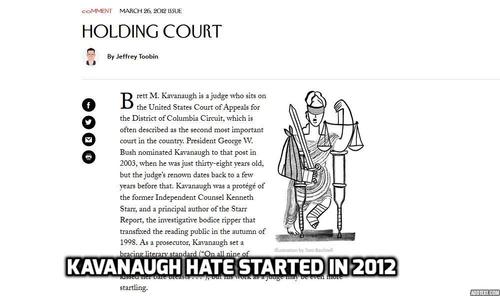 Supreme Court Nominee Accused of Something Sometime in Distant Past

Accuser can’t remember what year it was, probably in early 1980s, when both were in high school, but says she told her marriage counselor about it in 2012.

According to The Megaphone, this is Incredibly Important.

One oddity of her account is that the accuser can’t remember the year, but is extremely certain of the identity of the boy she says she has never seen again in however many years it has been.

It’s worth pointing out Kavanaugh’s name was being Mentioned in the national press in 2012. Kavanaugh was being talked about as a potential supreme court nominee if  "a Republican, any Republican" won in November. The year 2012 is when professor Christine Blasey Ford apparently started accusing Kavanaugh by name, at a marriage counseling session, according to herself and her husband (but there’s no mention of Kavanaugh in the counselor’s notes).

Brett Kavanaugh’s name had been hurled into the national news in November 2011 as the dissenting vote in the biggest appeals court case of the year: Obamacare.

WASHINGTON (Reuters) – President Barack Obama’s signature healthcare law got a boost on Tuesday when an appeals court agreed with a lower court that dismissed a challenge and found the law’s minimum coverage requirement was constitutional.

In early 2012, The New Yorker was sounding the alarm about Kavanaugh:

Brett M. Kavanaugh is a judge who sits on the United States Court of Appeals for the District of Columbia Circuit, which is often described as the second most important court in the country. President George W. Bush nominated Kavanaugh to that post in 2003, when he was just thirty-eight years old, but the judge’s renown dates back to a few years before that. Kavanaugh was a protégé of the former Independent Counsel Kenneth Starr, and a principal author of the Starr Report, the investigative bodice ripper that transfixed the reading public in the autumn of 1998. As a prosecutor, Kavanaugh set a bracing literary standard (“On all nine of those occasions, the President fondled and kissed her bare breasts . . .”), but his work as a judge may be even more startling.

Late last year, a three-judge panel of the D.C. Circuit voted, two to one, to uphold President Obama’s health-care reform, known as the Affordable Care Act (ACA). Kavanaugh dissented, primarily on the ground that the lawsuit was premature. …

… If a Republican, any Republican, wins in November, his most likely first nominee to the Supreme Court will be Brett Kavanaugh. ♦

For example, Reuters suggested on April 19, 2012 that Kavanaugh was one of the two most most likely Romney nominees:

WASHINGTON (Reuters) – Now that Mitt Romney is the presumptive Republican nominee for president, the names of people he might appoint to the U.S. Supreme Court are starting to roll off the tongues of conservative activists, lawyers and former Republican administration aides. …

Paul Clement, who served as U.S. solicitor general under President George W. Bush and is now a lawyer in private practice, is the favorite of many conservatives. …

Mentioned as often as Clement is Judge Brett Kavanaugh of the U.S. Court of Appeals for the District of Columbia Circuit.

Kavanaugh, 47, sits on a court that produced four sitting justices. He has deep roots in Washington, D.C., having worked in the Bush White House and assisted in the 1990s investigation that nearly led to President Bill Clinton’s ouster.

Kavanaugh is known for elaborate opinions such as a 65-page dissent he wrote in November exploring how an 1867 tax law barred courts from considering Obama’s healthcare law until 2015.

Is it a coincidence that Ms. Blasey Ford does not appear to have accused Kavanaugh until after Kavanaugh surfaced in the national news as a Republican legal hero?