VDARE Radio: The "Looking To Other Nations" Immigration Act

Welcome to VDARE Radio and I’m your host Virginia Dare. We can’t endorse specific legislation or candidates here at the VDARE Foundation. But as a thought experiment, what would it look like if America, being a nation founded on diversity, and tolerance, and multiculturalism, looked to other nations for guidance on immigration laws? Here’s a few ideas. 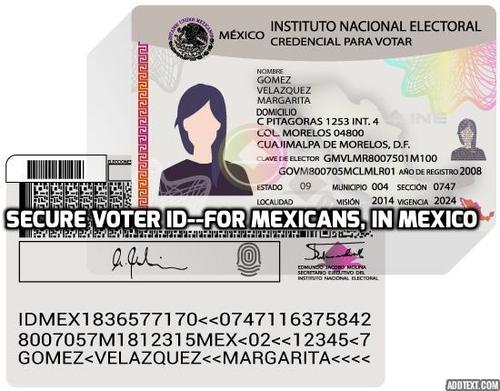 For starters, let’s look at our neighbor to the south, Mexico. We could start by adopting Mexico’s Voter ID system. As our own Allan Wall documents, a Mexican must prove his citizenship and address and is given an extremely difficult to counterfeit Voter ID. At every polling station, a book contains information about each voter in the district, along with a photograph. Officials check these records against each other before allowing people to vote.

This seems like the kind of system Americans could adopt. Why would anyone be against it? What are they, racist?

We also might want to consider Article 43 of Mexico’s General Law of Population, which states:

When foreigners, including Americans, attempt to meddle in Mexico’s domestic affairs, they are swiftly deported. This includes American college students who do things like participate in protest marches. Noncitizens are not allowed to participate in any way in the political life of the country.

Mexico also regulates immigration based on the goals of preserving the “national demographic equilibrium” of the country as well as the “economic interests of Mexicans.”

Or consider Israel. Israel has built an enormous wall designed to prevent both terrorism and illegal immigration. Prime Minister Benjamin Netanyahu has also vowed to deport what Israelis call “illegal infiltrators” out of the country.

Or consider Denmark, which offered illegal immigrants money to leave the country. Germany is doing the same thing.

Supposedly, the Trump administration and the united Republican Congress meant America had a “nationalist” government. But though illegal immigration has slowed, it has not stopped. The wall has not been built.

More importantly, though President Trump still talks about draining the swamp, there’s been no effort to drain the illegal immigrant population. Deporting MS-13 is fine, but that’s something any president should be doing.

President Trump and the Republican Congress could simply look to other nations for creative ways to help solve the problem of illegal immigrants and drain the ranks of the illegal infiltrators. And it would allow patriots to frame the issue in a way difficult for the Main Stream Media to combat.

After all, few are actually opposed to nationalism. Indeed, many of our fieriest opponents are what we can only term xenophobic, jingoistic, ultranationalists. It’s just they aren’t nationalists for our country, they are nationalists for their own countries. They just happen to reside here.

Let the New York Times or Chuck Schumer argue against President Trump’s wall if he says he is doing exactly what Israel is doing. Let the Hispanic Caucus argue against Voter ID if President Trump says he’s doing exactly what Mexico does. Let all those liberal press organs who tried to say Angela Merkel is the leader of the free world protest if the GOP copies what the Danes and the Germans do to get illegals to leave.

President Trump has been in a defensive crouch for months and his poll numbers are plummeting. It’s time to take the offensive. And as we are such fans of internationalism, he can look to nations around the world for inspiration.