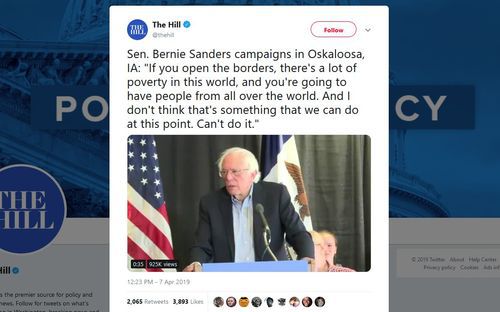 Socialist Senator Bernie Sanders is running for the Democratic nomination for president again, despite technically not being a Democrat. What’s more, he has to be considered the front runner at this point. [Bernie Sanders is adjusting to a new campaign role: Front-runner, by Juana Summers and Julie Pace, USA Today, April 8, 2019] Yet Bernie Sanders just got himself in trouble with the far-left when he explicitly denied the feasibility of open borders in a recent speech.

"If you open the borders, there's a lot of poverty in this world, and you're going to have people from all over the world. And I don't think that's something that we can do at this point. Can't do it."

This is obviously true. This is something immigration patriots have argued for some time. If you simply open the borders, America will be overwhelmed by the impoverished of the world. I mean, that’s basically what’s happening already. 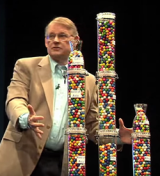 What’s more, there are so many poor people in the world that you aren’t going to do much to ameliorate world poverty. All you are going to do is destroy America. This is at the heart of Roy Beck’s famous “Gumball Presentation,” where he shows how utterly flooding America would do almost nothing to reduce world poverty. [Immigration, World Poverty and Gumballs, by Roy Beck, Numbers USA, December 1, 2019]

Yet this common sense approach can no longer be tolerated by the Democrats newly “woke” base. Immigration to them is a moral imperative, not because it does anything to help America, but because it is inherently immoral to have any restrictions on immigration.

Aside from the fact that it gives this country a free pass—why should we be able to refuse refugees from physically or economically violent situations that American capitalism and imperialism helped create?—Sanders also just sounds a lot like the guy he’s running to replace…

America is not full, and yes, we can take more poor people. As Sanders is often fond of saying himself, America is the richest country in the history of the world. And it’s high time we share that wealth with the working class, no matter what country you were born in or what your citizenship status is.

I actually admire the frankness here. First, the idea that American “capitalism and imperialism” are responsible for the Third World being, well, the Third World. Once again, non-Western countries have no agency or independence. If they are poor, it’s our fault.

I also admire the call to simply redistribute American wealth, “no matter what country you were born in or what your citizenship status is.” There’s not even the pretense of pursuing America’s national interest. Of course, dismantling America’s wealth, which is apparently just lying around, will barely make a dent in world poverty. It will simply destroy the country. And unlike Third Worlders, we have nowhere to run for asylum.

But there’s a big problem here. The main reason we have an immigration problem is because insanely short-sighted employers want cheap labor. That is why immigrants are brought into the country, to reduce wages. That’s why they oppose the E-Verify program. That’s why they constantly want amnesty. The social and economic costs are dumped on the American taxpayer, the private employers reap the benefits. The status quo is socialism for the rich.

That’s what’s already happening now. In classical Marxist rhetoric, you always hear that the bourgeoisie is promoting nationalism and patriotism, supposedly to “divide” the working class. But we see the opposite happening today. Big donors were fiercely opposed to Donald Trump’s 2016 campaign, and companies who once did business with him cut ties immediately when he started talking about immigration.

You can be a Communist and say you want to guillotine the capitalists, steal the wealth, and bring down the entire social order. You will never experience the slightest inconvenience from any social networking company, bank, or other private service. They might even sponsor you. Call for violence against right-wingers and you can still be on YouTube or Twitch. None of these supposed revolutionaries have ever experienced oppression in their lives.

But if you talk about stopping immigration, you will find yourself deplatformed, cut out from basic services, and viciously attacked by the corporate media. Just ask Faith Goldy!

Open borders is a Koch Brothers proposal, like Bernie Sanders himself said in 2015. Of course open borders would reduce wages. That’s why oligarchs want it so badly. That’s why if you are serious about helping American workers, you have to support immigration restriction, just like labor leaders Samuel Gompers and Cesar Chavez did.

Ultimately, progressives must decide if they have any loyalty to the American worker at all, or if they want to see him destroyed just so they can demographically transform this country. Senator Sanders at least has some common sense on this subject. Unfortunately, compared to the average journalist, he’s practically on the far right.