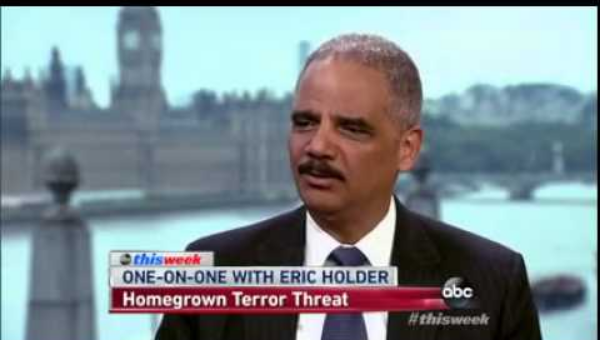 Eric Holder, the Barbadian-American head of the Department of Justice, is having trouble sleeping:

HOLDER: 'Homegrown Violent Extremists... Keep Me Up at Night' http://t.co/F57RTMGaMF

This apparently refers to white people who own guns, but the example he uses to illustrate how dangerous the people he's "monitoring" are are the Muslim immigrant terrorists who did the Boston Marathon Bombing:

Asked the ABC News reporter, "Is that threat," like the Boston Marathon bombing last year, "any less serious?"

"These lone wolves. These homegrown violent extremists are people who keep me up at night, as well," said Holder. "Trying to monitor them,  |. And the experience that we had in Boston is instructive. It only takes only one or two people to really do something horrific."

The ABC anchor says the reporter and Holder talked about "homegrown terrorists who are motivated more by domestic concerns." .

"Yes," the reporter says citing a couple recent examples. [Two of the extremely rare, but of course well-promoted, examples of political violence committed by whites in Las Vegas and Georgia.] "He said that is coming back, as well. There may be a resurgence. He said there are a lot of sleepless nights these days."

Here's part of the interview with Holder and black reporter Pierre Thomas:

Of course, when Holder talks about "trying to monitor" the "homegrown" threat, he means government spying on anyone the SPLC  or Anti-Defamation League considers dangerous.

When he speaks of  "trying to anticipate what it is they are going to do", I'm afraid he means government infiltration, agents provocateurs, and entrapment operations against, once again, anyone  the SPLC  or Anti-Defamation League considers dangerous.  See the case of the of the "Hutaree Militia", who were found not guilty in a court of law.

That's the kind of thing that troubles Eric Holder's sleep, and not because of a guilty conscience. Here's what doesn't trouble his sleep:

These are things he's not worried about, but he might be prepared to take action against anyone "homegrown" who tries to defend themselves, like the protesters at  Murrieta, California who stopped  the Federal buses carrying illegals to their town.

That's the kind of opponent he likes.