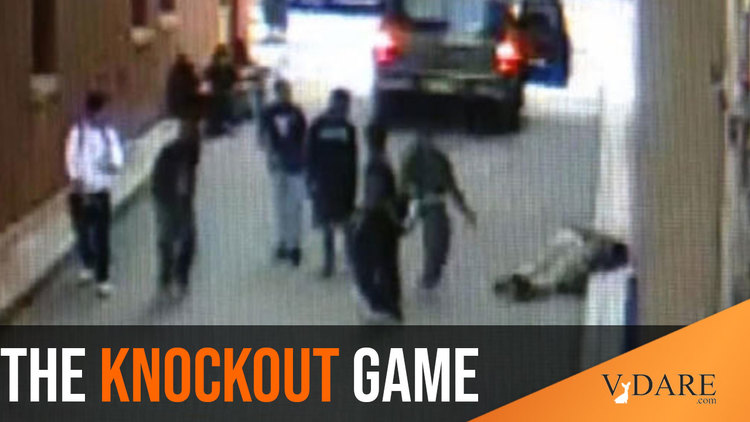 On a break from pretending to believe they live in a country bristling with violent white racists, the Non-Fox Media have been trying to debunk stories about the “Knockout Game,” in which young black males approach random strangers and try to knock them out with one punch.

The left’s leading line of defense against the Knockout Game is to argue that young black males have always been violent, so, hey, this is nothing new.

In Slate, Emma Roller wearily recounted other episodes of black-on-white violence in order to announce: “The ‘Knockout Game’ is a myth.”

Reminiscing about the flash mobs that shook many parts of the country a few years ago, Roller wrote: “I remember the summer of 2011, a story about a crowd of (black) teenagers at the Wisconsin State Fair randomly attacking fairgoers went viral as a sign of a burgeoning race war.”

So you see, stupid right-wingers, young black males have always been violent, so what’s the big deal about the Knockout Game? Your honor, my client’s not a killer; he’s a serial killer.

MSNBC’s Chris Hayes reached for a different example of monstrous black-on-white violence in order to dispute that the Knockout Game is anything new.

Looking like a translator for the deaf with all the air quotes he had to make for “supposed” “trend” and “Knockout Game,” Hayes compared it to what he called the fake trend of “wilding” after a mob of black youths violently attacked and raped a white woman jogging in New York’s Central Park in 1989. According to Hayes, “there never was such a thing” as wilding.

Whether the boys who were convicted of the crime did it or, as liberals now claim, a man already sentenced to life in prison did it, the Central Park jogger was brutally raped and nearly murdered by either one or several young black men. (They all did it—see Chapter 13 of my book “Demonic.”)

The following year, 1990, blacks committed 57 percent of all the violent crime against whites, while whites committed only 2 percent of the violent crime against blacks, according to the Department of Justice’s annual Victimization Report. Thanks for the memories, Chris! Oh, and contrary to Hayes’ proclamation, black men raping white women is something of a “trend”—at least according to FBI crime statistics. At least since 1997 (I got bored and stopped looking any farther back) blacks have raped several thousand white women every year, while white-on-black rapes have numbered between “0.0? and “Sample based on 10 or fewer.” (See Chapter 11 of “Mugged.”)

In a particularly incomprehensible defense of black America in Mediaite, Tommy Christopher denounced the “sketchy” news reports of “the so-called ‘Knockout Game’” by citing the video of a group of black teenagers walking past teacher Jim Addlespurger, when one of the black teens steps from the group and knocks the teacher out cold, and then they all laugh about the assault as they continue walking.

But Christopher helpfully notes that a cop said this “was just a random act of violence.” So don’t worry about the Knockout Game, white people—this is mostly just ordinary, everyday black-on-white violence.

Liberals have to work so hard to avoid noticing the astronomical crime rate among young black males that their brains freeze.

Roller attributed public interest in a story about mobs of young black males attacking families at a state fair to white people’s need to validate their “fear” that black people are dangerous. (Milwaukeeans hardly even notice when mobs of whites surround their families at a state fair, punch them, kick them and smash their cars, while shouting racial slurs.)

But Roller implied that blacks engaging in violence is wildly unusual: “When a few YouTube videos are able to convince terrified white folks that young black people are dangerous, they may as well assume that all cats can play the keyboard.”

Is a disproportionate amount of keyboard playing in the country being done by cats?

According to the FBI, between 1976 and 2005, blacks, who are about 12 percent of the population, committed 53 percent of all felony murders and 56 percent of non-felony murders. The Centers for Disease Control recently reported that young black men are 14 times more likely to commit murder than young white men.

White liberals know this. Blacks certainly know it. Despite the hoo-ha over George Zimmerman shooting Trayvon Martin, most black people’s experience is not that white vigilantes are shooting them. For every one of those, there are 1,000 black teens killing other black people.

But if liberals took the first step toward sanity and admitted that young black men commit an awful lot of violent crime, they might have to ask why that is.

That’s a dangerous question for people who refuse to acknowledge the devastation of fatherless boys caused by liberal welfare policies. (See Chapter 6 of “Never Trust a Liberal Over 3? to see how the British welfare system has created the same social disaster among hordes of white people.)

Unable to consider the obvious explanation—single-motherhood—liberals are left with nothing but genetic determinism.

So liberals defend young black males from the charge of playing a Knockout Game by telling us young black men are always violent.

Don’t worry, black America. White liberals have your back.