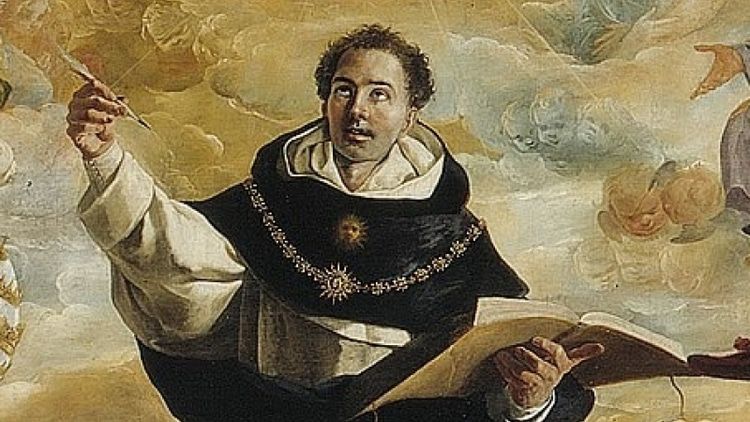 The American Society for the Defense of Tradition, Family, and Property is a conservative Catholic group notable for its medieval symbolism, traditionalist ideology, and forthright tactics. It specializes in social conservative activism and generally has a large presence at Beltway conservative events, notably CPAC.

Though the group certainly doesn't shy away from controversy, it has been largely silent on immigration. However, the group recently published the thoughts of Saint Thomas Aquinas, Doctor of the Church, on immigration and the immorality of open borders. They may prove useful for Catholic readers who want to oppose the open-borders hierarchy.

One has only to look in his masterpiece, the Summa Theologica, in the second part of the first part, question 105, article 3 (I-II, Q. 105, Art. 3). There one finds his analysis based on biblical insights that can add to the national debate. They are entirely applicable to the present.

Saint Thomas: “Man's relations with foreigners are twofold: peaceful, and hostile: and in directing both kinds of relation the Law contained suitable precepts.”

Commentary: In making this affirmation, Saint Thomas affirms that not all immigrants are equal. Every nation has the right to decide which immigrants are beneficial, that is, “peaceful,” to the common good. As a matter of self-defense, the State can reject those criminal elements, traitors, enemies and others who it deems harmful or “hostile” to its citizens.

The second thing he affirms is that the manner of dealing with immigration is determined by law in the cases of both beneficial and “hostile” immigration. The State has the right and duty to apply its law.

Saint Thomas: “For the Jews were offered three opportunities of peaceful relations with foreigners. First, when foreigners passed through their land as travelers. Secondly, when they came to dwell in their land as newcomers. And in both these respects the Law made kind provision in its precepts: for it is written (Exodus 22:21): ’Thou shalt not molest a stranger [advenam]’; and again (Exodus 22:9): ’Thou shalt not molest a stranger [peregrino].’”

Commentary: Here Saint Thomas acknowledges the fact that others will want to come to visit or even stay in the land for some time. Such foreigners deserved to be treated with charity, respect and courtesy, which is due to any human of good will. In these cases, the law can and should protect foreigners from being badly treated or molested.

Saint Thomas: “Thirdly, when any foreigners wished to be admitted entirely to their fellowship and mode of worship. With regard to these a certain order was observed. For they were not at once admitted to citizenship: just as it was law with some nations that no one was deemed a citizen except after two or three generations, as the Philosopher says (Polit. iii, 1).”

Commentary: Saint Thomas recognizes that there will be those who will want to stay and become citizens of the lands they visit. However, he sets as the first condition for acceptance a desire to integrate fully into what would today be considered the culture and life of the nation.

A second condition is that the granting of citizenship would not be immediate. The integration process takes time. People need to adapt themselves to the nation. He quotes the philosopher Aristotle as saying this process was once deemed to take two or three generations. Saint Thomas himself does not give a timeframe for this integration, but he does admit that it can take a long time.

Saint Thomas: “The reason for this was that if foreigners were allowed to meddle with the affairs of a nation as soon as they settled down in its midst, many dangers might occur, since the foreigners not yet having the common good firmly at heart might attempt something hurtful to the people.”

Commentary: The common sense of Saint Thomas is certainly not politically correct but it is logical. The theologian notes that living in a nation is a complex thing. It takes time to know the issues affecting the nation. Those familiar with the long history of their nation are in the best position to make the long-term decisions about its future. It is harmful and unjust to put the future of a place in the hands of those recently arrived, who, although through no fault of their own, have little idea of what is happening or has happened in the nation. Such a policy could lead to the destruction of the nation.

As an illustration of this point, Saint Thomas later notes that the Jewish people did not treat all nations equally since those nations closer to them were more quickly integrated into the population than those who were not as close. Some hostile peoples were not to be admitted at all into full fellowship due to their enmity toward the Jewish people.

Saint Thomas: “Nevertheless it was possible by dispensation for a man to be admitted to citizenship on account of some act of virtue: thus it is related (Judith 14:6) that Achior, the captain of the children of Ammon, ‘was joined to the people of Israel, with all the succession of his kindred.’”

Commentary: That is to say, the rules were not rigid. There were exceptions that were granted based on the circumstances. However, such exceptions were not arbitrary but always had in mind the common good. The example of Achior describes the citizenship bestowed upon the captain and his children for the good services rendered to the nation.

The full article can be read here. The larger significance is that Obama's lawlessness is making even conservative groups that used to ignore the issue at least address it. But if it doesn't lead to action, what's the difference?