Black Immigrants And Convergence To The Mean

Via Marginal Revolution, here's a paper by Alison Rauh:

Convergence Between Black Immigrants and Black Natives Across and Within Generations

(Another issue is regression toward the means among immigrants. The first immigrants from Africa in the 1960s and 1970s tended to be bright students like Barack Obama Sr., but they tended to pave the way for more mediocre family members like the President's Uncle Omar and Aunt Zeituni.)

How to raise their children is a source of debate among black immigrant parents. The American entertainment industry has profitably promoted the most dysfunctional traits of African American men as the essence of Keeping It Real. 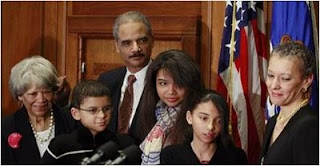 Attorney General Eric Holder's Barbadian parents raised him in a West Indian middle class enclave in New York and tried to minimize his contact with African Americans. Barack Obama was sequestered out in the middle of the Pacific Ocean, thousands of miles from the nearest vibrant black community of any size.

Seems to have worked pretty good!

Malcolm Gladwell wrote an interesting chapter in his besteller “Outliers” about how hard his mulatto middle class Jamaican direct ancestors strove to avoid regression to the mean by only marrying fair skinned spouses. Various aunts and great-aunts couldn’t resist sexy black men and their descendants fell out of the middle class, while Malcolm’s mom married a white mathematician, and now Malcolm’s a famous author.

(Of course, reading Malcolm’s explanation of his ancestors’ successful mating strategy for producing a Malcolm Gladwell is like reading the Declaration of Independence translated into Newspeak: uh, crimethink! I mean, racism!)

In contrast, in West Africa polygamy tends to break down caste formation. For example, I had a good friend from Cameroon when I was at UCLA. He came from a very well-educated family—eight of the nine children had advanced degrees from Western universities, and two of his brothers were in Cameroon's cabinet. But, he planned upon a life of gerontocratic polygamy, adding each decade another wife up to a limit of four concurrent wives. That kind of quantity of wives makes it hard to emphasize quality in choosing them, and makes it hard to invest heavily in each child.

This paper adds to the existing literature on three dimensions. First, it lays out the fact that black immigrants have become a large part of the black population in the last decades. Second, it demonstrates that the characteristics of immigrant blacks are very different from those of native blacks. Third, it determines how much immigrants blacks converge to native blacks across and within a generation. To put these patterns into perspective, they are compared to those of other races/ethnicities. The share of black immigrants among the black population in the US has increased from 1% in the 1970s to 11% in 2011. Black immigrant males’ earnings and wages are higher than those of native blacks but the premium is small once we condition on being employed. Employment, education, incarceration, and marriage outcomes confirm that we are dealing with two completely different subsets of the population. Black immigrants are much more likely than native blacks to be employed, married, highly educated and not incarcerated.

In summary, first generation black immigrants undoubtedly have better labor market outcomes than black natives. They directly pass on some characteristics such as high human capital investments to the next generation. The transmission of labor force attachment seems to be weaker, suggesting that the second generation is converging to natives. Black immigrants do not only converge to black natives across generations but also within a generation. For Asians and Hispanics, earnings premia decrease monotonically with age of immigration. For blacks, the earnings-age of immigration profile is upward sloping for those immigrating before the age of 15. Convergence across generations is mostly driven by low-educated second generation blacks that drop out of the labor force in greater numbers than low-educated first generation immigrants do. Similarly, convergence within a generation is driven by the fact that black first generation immigrants who arrive at an early age have a weaker labor force attachment than immigrants who arrive in the US when they are older. A social interactions model with an assimilation parameter that varies by age of immigration helps explain this phenomenon for men. When making their labor force participation decision, male immigrants generally place more weight on the characteristics of natives the earlier they immigrate.[Emphasis added]

Basically, the second generation of black immigrants do okay unless they don’t get much education (i.e., aren’t very bright). Then the males are in danger of not participating in the (legitimate) work force, just like African American males.

I may be interpreting this wrongly, but it appears that black males who were born abroad do worse the younger their parents brought them here. For example, if you arrive at 17, you aren’t that likely to join the Bloods or Crips to deal crack. It just seems stupid.

But if you arrive at age 2 and you grew up your whole life hearing from the other boys at school about the Bloods or Crips, well, if you want to prove your manhood, you join their local gang affiliate at age 13.

But maybe I’ve got this backwards.

Dr. Rauh seems to blame the age effect on accent, with white people positively discriminating in favor of foreign black accents. Could be.

But of course the stereotype that a black with a prissy-sounding Anglo-Nigerian accent is probably a grad student type who won’t mug you is, according to all the evidence Dr. Rauh assembles, a pretty accurate one. Whereas a jet black youth who tries to have an accent like some gangsta from Compton probably isn’t a grad student type. If he sounds like a gangsta during a job interview, maybe that’s what he wants to be.

Lots of other good stuff in this paper by Dr. Rauh.

Post
The McMichaels’ Trial Is Worse Than Horrible, It Is Precedent Setting, Affecting Anyone Who Defends Himself From An Attempted Gun-Grab
MORE...
POPULAR TAGS