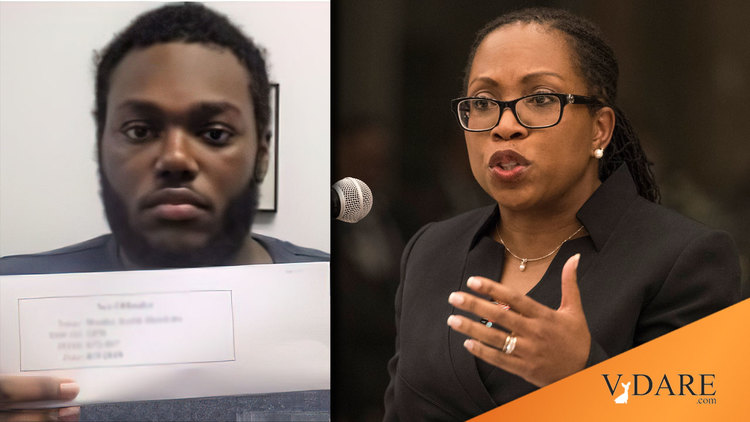 Aaron C. Davis' Washington Post article about Wesley Hawkins' child pornography case doesn't contain a photo of Hawkins himself, but rather, as I noted last night, of Ketanji Brown Jones, whom the MSM considers the real victim. It also doesn't say he's black, but this Twitter user "just knew" he must be.

I knew from how Republicans were talking that Wesley Hawkins was Black. They wanted him punished to the max &couldn’t understand how a Black judge could could be fair to this young man. My instincts are never wrong. They just never said it but I knew it. https://t.co/80gqGr85zX

Wesley Hawkins heard a few weeks ago that a Black woman had been nominated to the Supreme Court and wondered why her name, Ketanji Brown Jackson, sounded so familiar. Then, he saw her picture and knew. Jackson was the judge who had sentenced him for possession of child pornography nine years earlier, when he was a teenager.

That is the only time the word “Black” appears in the article.

Taking in the sparring in the YouTube cuts, Hawkins’s wide frame hunched forward and he balled up his hands in front of his white T-shirt. Over two hours, he appeared to cycle through shock, anger, frustration and finally, calm.

That’s the only time a color (of his T-shirt) is referenced by Davis. Remember, this is a white reporter interviewing a black sex criminal who's been given a sweet deal by a black judge, and he won't say he's black. I presume the Twitter user above was going by social cues: retail job, single mother, "homophobic" family and neighborhood, and the fact that Davis mentions his favorite novelist is Jamaican author Marlon James.

Davis did say that Hawkins had to register in the District of Columbia as a sex offender with his address and photo. I've obscured the address, which only tells you which block he lives on, and is designed to warn local moms not to use him as a baby-sitter, but here's, as far as I know, the first picture published of him:

In order to find this registry, I had to page through the list of D.C. registered sex offenders, arranged, annoyingly, alphabetically by FIRST name, making me wish this guy's name was Aaron instead of Wesley. (Seven men named Tyrone are registered as sex offenders in D.C.)

But it's not really about him.

Child sexual abuse, including by teens, is rife in the black community. See my The Lawyer Dog And The Unmentioned Child Rape Victims for one example.

Furthermore, leniency towards black defendants, especially teens, and including child molesters, is rife in the black judge community, and they're not trying to put Hawkins on the Supreme Court.