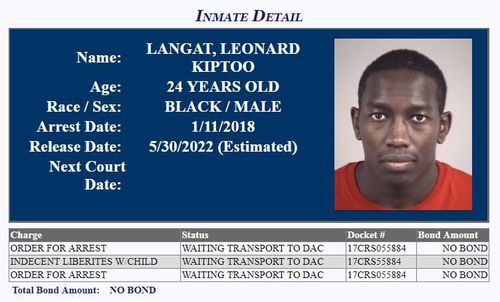 Above, Leonard Kiptoo Langat, pictured in a Cabarrus County, NC mugshot, is a FORMER Midshipman at the US Naval Academy, Annapolis Maryland. In December, during what the AP refers to as a "holiday break" (USNA calls it "Christmas") he engaged in incestuous rape of a minor child. Now he's not going to be an Admiral--if he ever was.

ANNAPOLIS, Md. (AP) — The Naval Academy says a midshipman is being dismissed following his sentencing to 12 to 24 years in prison for a sex crime involving a girl in North Carolina.

The Capital reported Friday that Midshipman 2nd Class Leonard Kiptoo Langat is on a leave of absence pending an administrative process to separate him from the academy.

Langat was away from the school on holiday break in Concord when he entered a female relative’s room and engaged in unwanted sexual activity.

Here are some questions you might ask, starting with "What kind of name is Leonard Kiptoo Langat?" That's the only one I know the answer to--it's Kenyan. There's a Kenyan track star named Leonard Langat, and there are also lots of Kenyans named Kiptoo.

Those are questions I don't have answers for, but I can tell you that the Service Academies are rife with Affirmative Action, and incidents like this are a predictable result.