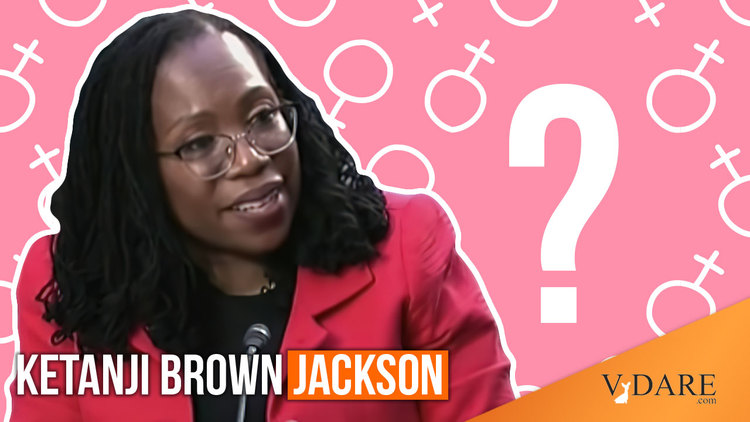 Ketanji Brown Jackson And The Definition Of A Woman

Most Supreme Court nominee hearings are a snooze unless there is some sex thing (and Supreme Court nominees typically don’t have terribly lurid sex lives), because nominees are taught to deflect interesting questions as either being irrelevant or too relevant. But Sen. Marsha Blackburn managed to slip in a 3 a.m.-in-the-Dorm-Room question that is now a massive hot potato due to the sacralization of World War T. From Politico:

“Not in this context. I’m not a biologist,” Jackson said.

“The meaning of the word woman is so unclear and controversial that you can’t give me a definition?” Blackburn asked. …

“The fact that you can’t give me a straight answer about something as fundamental as what a woman is underscores the dangers of the kind of progressive education that we are hearing about,” Blackburn said, before turning to Thomas, who has been at the center of the debate over policies for transgender athletes.

Blackburn asked what message allowing Thomas to compete sends to “girls who aspire to compete and win in sports?”

“Senator, I’m not sure what message that sends. If you’re asking me about the legal issues related to it — those are topics that are being hotly discussed, as you say, and could come to the court,” Jackson said before Blackburn cut her off, to explain her view of what message this delivers to young women.

“I think it tells our girls that their voices don’t matter,” Blackburn responded. “I think it tells them that they’re second-class citizens. And parents want to have a Supreme Court justice who is committed to preserving parental autonomy and protecting our nation’s children.”

‘Overtime’ implies a gradual secular positive trend in the usage/adoption of a given word. But what we instead observe for many of the words in the context you’re referring to are ‘hockey sticks’—sudden and sharp surges in prevalence that hardly appear organic and which…

For example, think about all the conservative ideologues in Cambodia in April 1975 who became needlessly uneasy when the Cambodian language naturally evolved so that the definition of “the current year” was no longer “1975” but now “The Year Zero.”

Similarly, this totally natural evolution of the English language in the direction of confusion, incoherence, and madness regarding the definition of “woman” couldn’t cause much more harm than, say, pushing tens of thousands of young women toward having themselves poisoned, mutilated, and sterilized.