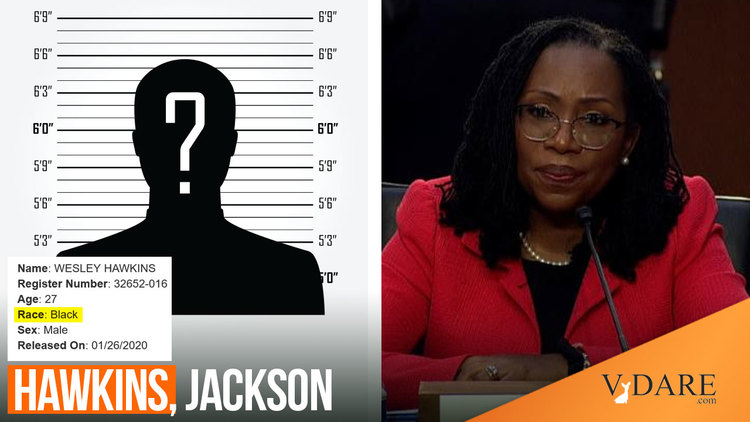 In asking Supreme Court nominee Ketanji Brown Jackson's soft-on-child-porn decisions,  Republican questioners have brought up one particular case, that of 19-year-old Wesley Hawkins, sentenced to three months when he could have got eight years, and who may have re-offended:

Neither of those stories has a picture of Mr. Hawkins. They either picture the real victim (KBJ) or the real villains (white Republicans):

The Washington Post confirms that the defendant Judge Brown Jackson sentenced to just 3 months—even though guidelines called for 8-10 years—continued to offend after being released.

If he had been sentenced appropriately, this would not have happened.https://t.co/wlryPjtwvX

This is the case that Rnuts were beating her up about. https://t.co/6k6SPJYYeP

The WaPo gives Jackson's rationale for the light sentence:

Jackson said the relative age of those Hawkins was viewing also had to be weighed: “Most child pornography offenders are middle-aged adults who are deviants drawn to pictures of vulnerable children … This case is different because the children in the photos and videos you collected were not much younger than you. This seems to be a situation in which you were fascinated by sexual images involving what were essentially your peers.”

That's a stereotype, and it may be true, but the stereotype, the picture most people have in their heads of a child sex offender, is that of white middle-aged man.

Someone reported this to me, and I went through various PDFs online of United States v. HAWKINS (1:13-cr-00244) District Court, District of Columbia  to confirm this, and it didn't say, although of course it did name him (Wesley Hawkins), which is suggestive, though there are white people named that, and said he was the child of single mother (first name Earline) and though there are white people named that, she is actually confirmed as a black woman in D.C. via Facebook.

But I don't want to link to people's Facebook pages, so I'll point out that the only Wesley Hawkins listed in the Federal BOP's records who's the right age is this guy: 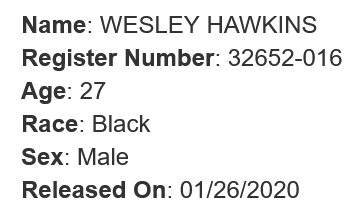 Now despite KBJ's stereotype of an older (and possibly whiter) child molester demographic, child sexual abuse, including by teens, is rife in the black community. See my The Lawyer Dog And The Unmentioned Child Rape Victims for one example.

Furthermore, leniency towards black defendants, especially teens, and including child molesters, is rife in the black judge community.

See my "Right Up There With Oxygen"—Why Race Is Important, And Who It's Important To and John Derbyshire's Black Judge Follows In Father's Pro-Criminal Footsteps—Nature Or Nurture?   for this story of the late Judge Bruce Wright (known to police, prosecutors, and crime victims as "Turn 'Em Loose Bruce" ) and his son Geoffrey Wright.

Is  Wesley Hawkins's race relevant? Is Ketanji Brown Jackson's? Judge Bruce Wright certainly thought his race was relevant—his autobiography is called Black Robes, White Justice, and is all about being a black judge in a world of white police and black criminals.

So can the GOP questioners bring themselves to ask about that kind of leniency? It's not as if they're not going to be called racists anyway.

It’s not exactly as if GOP can explicitly accuse the nominee of being Black; so they have to come up with something. https://t.co/6l8nzBkhoI