The Lawyer Dog And The Unmentioned Child Rape Victims

Elie Mystal, the black blogger at Above The Law, is on a rant against racism in Louisiana over  the "lawyer dog" decision that has produced some memes:

A Louisiana court was willing to look incredibly stupid to read in ambiguity.

I expect courts in Louisiana to do everything they can to deny African-American criminal defendants their constitutional rights. It’s just how they roll. But I also expect courts, even in Louisiana, to not be so obvious about their racial animus. You can do a lot to deny rights to black suspects without twirling your mustache and turning the adjudication of justice into a complete joke.

Here, they’ve gone too far. Suspect Warren Demesme asked for a lawyer while he was being questioned by the police. The police did not provide a lawyer and the Louisiana Supreme Court denied his writ of certiorari, because they claim that his request for a lawyer was ambiguous. Here’s what Demesme said, according to the Court, from Reason:

“If y’all, this is how I feel, if y’all think I did it, I know that I didn’t do it so why don’t you just give me a lawyer dog cause this is not what’s up.”[More] 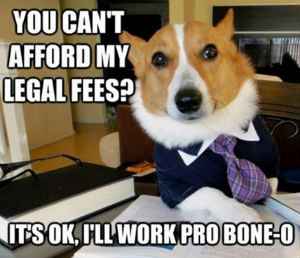 The Louisiana Supreme Court ruled, 6-1 [PDF]that this was casual enough, or ambiguous enough not to require them to pretend that he hadn't said what he had said—Fifth Amendment suppression.

Apparently Demesme meant "why don’t you just give me a lawyer, dog?" dog being used as a term of address in the vocative. The person he would have been addressing as "dog" was New Orleans detective Nijel Badoo, who is presumably a Ghanaian-American (Badoo being a Ghanaian name) but who in any case is black himself—pictured here.

My question in this kind of case is "What did he say he did?" Answer: he said he raped a girl under 13 years old.

This was not a big story in New Orleans, because it happens all the time. A raceless report in the Advocate nearly two years ago told of Demesme's arrest.

Detective Nijel Baddoo wrote in a warrant that two juvenile victims told investigators that Warren Demesme, 22, sexually assaulted them. Baddoo said one victim reported that Demesme “would portray the rape as a game, and the child articulated the sexual contact caused her pain.”

Baddoo reported that after being advised of his rights, Demesme admitted sexually assaulting one victim but denied doing so to the other.

The race of the victims is not specified—the balance of probabilities says that they are black too, because of neighborhood segregation in New Orleans. To put it another way, guys like Demesme are why whites move out of those neighborhoods.

Most of the stories about the "law dog" thing are illustrated with memes like the one above, but this local report has more about the rapes, and the illustration at right: 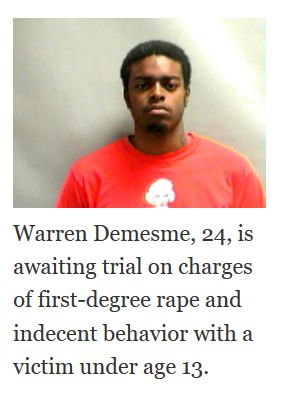 Justices voted 6-1 last week to deny the writ application of Warren Demesme, who awaits trial in Orleans Parish on charges of first-degree rape and indecent behavior with a juvenile under 13.

Demesme, 24, was arrested in October 2015 on allegations that he sexually assaulted two juvenile victims, including the rape of one preteen girl. He faces a mandatory life sentence if convicted of the rape charge.

Demesme, represented by the Orleans Public Defenders, sought to suppress a purportedly incriminating statement made to NOPD sex crimes detective Nijel Baddoo. According to arrest documents, Demesme admitted to sexually assaulting one of the child accusers, but denied doing so to the other.

Demesme voluntarily agreed to two interviews with police regarding his alleged sexual misconduct with the minors. In both recorded interviews, Demesme was read his Miranda rights, said he understood them and waived those rights...

The criminal is black, which exercises Elie Mystal, but so, apparently,  are the 12-year old—or younger—victims, so is the the detective, and so is Bernette Joshua Johnson—one of the six Louisiana Supreme Court judges who voted not to suppress his confession. (The only dissenter is a white male.)

So apparently this is a case of blacks enforcing the law to protect blacks—but Elie Mystal [Email him] can't stand it, because the offender is black, too.