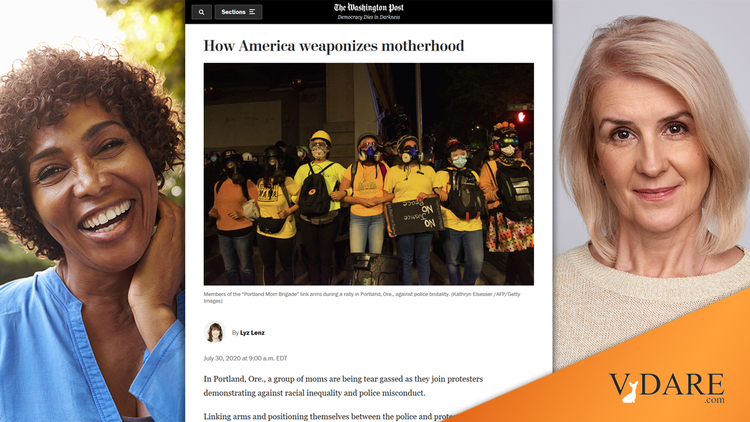 WaPo: While Black Moms Have Black Bodies, White Moms Only Have White Flesh

Perspective: The experience of motherhood in America is a political question just as much as it is a question of flesh.

We allow white mothers a sainthood not extended to other types of mothers. https://t.co/GnkvXRws1S

While, as we all know, Black moms have Black bodies, white moms only have white flesh.

In Portland, Ore., a group of moms are being tear gassed as they join protesters demonstrating against racial inequality and police misconduct.

Linking arms and positioning themselves between the police and protesters, the “Wall of Moms” chant, “Moms are here! Fed stay clear!”

The group was founded by Bev Barnum, a Portland mom, who told BuzzFeed News that she had the idea to form the group after seeing a social media video of federal agents detaining protesters. Her idea was to use her body, her status as a mother, as a shield between police and protesters. …

The experience of motherhood in America is a political question just as much as it is a question of flesh. We allow white mothers a sainthood not extended to other types of mothers. …

Recently, President Trump used similar pearl-clutching language to attempt to prey upon the sanctimony of white motherhood. He moved to repeal a fair-housing rule he claimed would turn nice white suburban towns into crime-ridden cities. It’s a racist appeal, one that signals that the suburban home and its idealistic purity is at threat of an angry Black mob. It’s a trope he’s used before in another way, with his multiple claims that Hispanic men are “rapists” and that Americans had to stop them from coming into our country. The dog whistle is always the purity and sanctity of white women, who get to be pure, who get to be holy and who get to be virtuous as mothers.

America also scorns single mothers. I learned this firsthand when I divorced three years ago.

As I’ve pointed out before, Ms. Lenz is a sad lady who believes in the SJW dogmas because it gives her somebody else to blame for her problems.

Meanwhile … the Democrats’ Coalition of the Fringes circular firing squad is further in action. From Oregon Live,

By Alex Hardgrave | The Oregonian/OregonLive

Portland Wall of Moms, a group formed in recent weeks and quickly recognized as a staple of nightly downtown protests, was accused publicly Wednesday of “anti-Blackness” by leaders of an existing, Black-led community group.

Wall of Moms, whose members said they aimed to support and protect other Black Lives Matter protesters near the fence in front of the federal courthouse, announced Friday that its white leadership had rescinded their positions to allow women of color to be in charge. New leaders announced Friday include Teressa Raiford, executive director of Don’t Shoot Portland, Demetria Hester and Danialle James.

But less than a week later, Don’t Shoot Portland took to Instagram to urge people against supporting the Wall of Moms, saying that it was no longer working with the moms group.

“The lies are finally clear and we are sad but ultimately not surprised that anti-Blackness showed its ugly head,” read the post published on Wednesday by Don’t Shoot Portland, a local Black Lives Matter and mutual aid group founded in 2014.

The Wednesday post alleges that Wall of Moms founder Bev Barnum filed for business registrations without consulting the newly instated Black leaders and that the safety of Black members at the nightly protests in downtown Portland was overlooked.

The post said that issues of Black mothers’ safety have only come to light in the past 24 hours.

Barnum appeared to file three business registrations on Tuesday including one that makes The Wall of Moms a 501c3 nonprofit. Don’t Shoot Portland interpreted the filings to mean that Wall of Moms goal was to get federal officers out of Portland — not to support Black Lives Matter, according to the Instagram post. The newly instated Black leaders were not told about the registrations, according to the post.

“None of the Black leadership WOM claimed to implement knew about this,” the Wednesday post reads. “Combined with the lack of care for Black women, we were used to further the agenda unrelated to BLM.”

The Wall of Moms answered a commenter’s question saying, “The founder went rogue. Many of us do not agree with her decisions. And she does not currently have access to this account.”

This sounds like the kind of announcement you’d hear on Third World countries’ national radio stations during chaotic 1970s coups when The Captains overthrow The Colonels:

It’s almost as if the Democrats’ Coalition of the Fringes needs straight whites to hate to have a hope of hanging together.