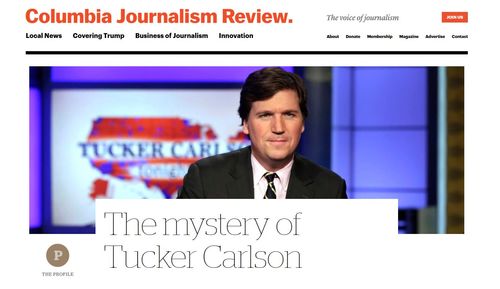 CJR: "The Mystery of Tucker Carlson"

From the Columbia Journalism Review:

… I’m a single mom, a freelance writer with two kids, swiftly facing a future with no healthcare. I’m cobbling together ghostwriting jobs, but it’s not enough. …

Despite his pedigree, or more likely because of it, Carlson has managed to become a vox populi of the deplorables. His show attracts an audience of 2.7 million people who see him as a voice of independent Americans.

These fans consider themselves independent thinkers, like Carlson; they love him for his unanswerable questions. …

This was the circle of hell I found myself stuck in during my interview with Carlson. … the conversation devolved into a lecture on free speech.

But according to Carlson, censorship is everywhere. Liberals are suppressing free speech in America by saying they are offended by everything, he tells me. The tech guy at Google, , he says, who was fired for exercising his free speech. Carlson is referring to the ex-Google employee James Damore who wrote posts on an internal company message board attributing psychological differences between men and women as the reason there was a gender gap at Google. Damore, Carlson argues, was fired for exercising his free speech. He was the epitome of diversity. And he got fired in the name of diversity. America, what a country. It’s totally Orwellian. …

I point out that sexuality and gender are inherently different and maybe he’s conflating the two. “Look biological reality is… super deep and exists apart from whatever social construct you’re buying into…and that comes with all kinds of physical consequences,” he explains, explaining nothing.

After the interview, I sent his PR person a link to an article that explains how science has indeed concluded that gender is not binary. His PR person told me “he has no comment on that.”

Carlson sees himself as brave for pointing out these truths in the minefield of liberal feelings. He likens it to Galileo, put to death for saying the earth is round.

… “You should be allowed to say what is provably true and I guess if you don’t agree with that…. that’s by definition irrational and it freaks me out when a large organization punishes people on the basis of irrational belief, because once that starts happening, like, why not kill the people that disagree with you?”

“Is this censorship,” I manage to ask, “or just consequences? Doesn’t speech have consequences?” But Carlson dodges.

… I don’t want to end free speech, I just want to tell him speech has consequences. I tell him that a year after Trump was elected I ended my 12-year marriage to a Republican.

“I’ve seen speech have real disastrous consequences. I am going through a divorce right now because of the way speech and politics and religion have worked out in my own marriage. So yes, I see intellectually, free speech. But personally, I see the deep pain. Like everyone, I see a problem in America and I don’t know a way around it.”

“You don’t know,” says Carlson, “Well, I do know… You oughta let people say what they think and you shouldn’t punish them for that, period. That’s how I feel.” …

Poor Ms. Lenz is broke, divorcing her husband for being a Republican (she says), not as sharp, and humorless. She’s kind of a loser.

Much of Social Justice Jihadism is the losers’ hope that if only they could get their personal loserness Socially Constructed as winnerness, they’d be happy winners. That’s what they are taught in college, so why shouldn’t they believe it? It helps them get out of bed in the morning. The first step toward our new, improved culture Socially Constructing themselves into winners is of course to shut up anybody who points out that’s not really how the world works.