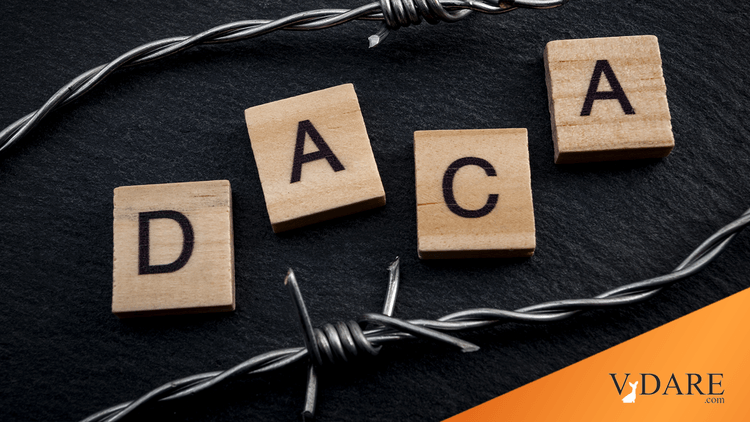 Previously: What The Heck Is Going On With DACA?

The Department of Homeland Security announced this week it would accept no more illegal immigrants who apply for amnesty under the Deferred Action for Childhood Arrivals program.

DACA, which legalizes illegal aliens who came to the U.S. as minors, was reinstated last month by the Supreme Court. Trump had scrapped it in 2017 and reportedly plans to issue a new rescission sometime soon. A federal court ordered the Trump administration to accept new DACA applicants following the Supreme Court’s ruling. But DHS Acting Secretary Chad Wolf says they will do no such thing.

"I have concluded that the DACA policy, at a minimum, presents serious policy concerns that may warrant its full rescission," Wolf said in a memo. DHS plans to “review” DACA before proceeding with any new policy changes [Trump Administration Refuses To Accept New DACA Applicants Despite Court Rulings, by Joel Rose, NPR, July 28, 2020].

This indicates that Trump is still committed to rescinding the amnesty enacted by Barack Obama. But it is taking him forever.

It was reported in early July that the president was expected to issue an executive order rescinding DACA within days.. It’s now almost August and there is no executive order. The president has also made some bizarre comments about DACA, rambling in one interview he wants to offer these illegal aliens a path to citizenship. The White House later clarified that the executive order will not offer that terrible idea and the president doesn’t even have the power to grant that privilege.

White House press secretary Kayleigh McEnany [Tweet her] offered no timeline for the DACA executive order, but said it would focus on “merit-based” immigration. She also said that the president thinks there should be a legislative rather than executive fix to the issue. That statement leaves a lot of ambiguity, but it’s better than Trump’s “path to citizenship” comment [McEnany: Trump would like to see 'legislative fix' to DACA, order will focus on 'merit-based immigration', by Morgan Phillips, Fox News, July 24, 2020].

Trump himself gave a similarly vague answer this week about DACA.

Trump, when asked about DACA: We’re going to work with a lot of people on DACA and we’re also working on an immigration bill - a merit based system.

The refusal to accept new DACA applicants is a good sign, however. It shows Trump not bowing to the pressure from liberal judges and may still do the right thing. But he needs to hurry up—the election is less than 100 days away.