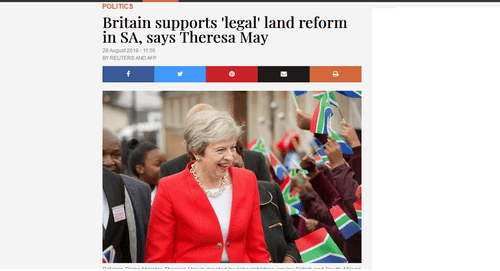 The Main Stream Media is outraged about President Trump broaching the forbidden subject of the treatment of white farmers in South Africa. Journalists would prefer the president handle South Africa in the way that Prime Minister Theresa May does, by giving it her blessing as long as it is "legal."

Britain supports South Africa’s land reform programme provided it is carried out legally, Prime Minister Theresa May said in Cape Town on Tuesday, adding that she would discuss the issue with President Cyril Ramaphosa.

“The UK has for some time now supported land reform. Land reform that is legal, that is transparent, that is generated through a democratic process,” May said. “It’s an issue that I raised and discussed with President Ramaphosa when he was in London earlier this year. I’ll be talking about it with him later today.”

May has also pledged to prioritise investment in Africa as she started a three-nation visit to the continent to drum up new trade deals ahead of leaving the European Union.

What killed Rhodesia and South Africa was not domestic insurgency, but foreign pressure from Western nations, especially America and the United Kingdom. As Peter Brimelow wrote about Rhodesia: "In the Rhodesians, we saw ourselves as we were and might have been. And we hated us."

South Africa is a different story, as the United Kingdom has always been quite hostile towards the Boers. Yet it's still striking that the United Kingdom's position has gone from "majority rule" to "expropriating minority property" without so much as a hint of opposition from the Conservatives.