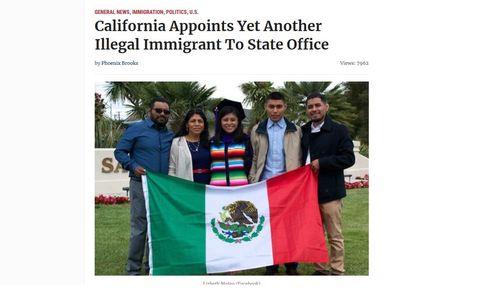 I’m not talking about the area of legislation strategy and Resistance from cucks like Paul Ryan or Mitch McConnell, nor am I a specialist in the evil machinations of the Lying Press. What I know is immigration enforcement. And while there is a Resistance in the Department of Homeland Security (DHS), something I warned about, but also advised there would be allies as well, I suggested how to manage what said Resistance in DHS. I have also suggested various positive measures to take in the area of immigration enforcement, from arresting Democrat politicians to arresting illegal aliens, not just criminal aliens, to make the average illegal feel the heat, using age old immigration law enforcement techniques long practiced by the legacy Immigration and Naturalization Service (INS) such as Area Control and City Patrol.

Sadly, President Trump, on his own volition, decided not to take that advice. Worse yet, the Trump Administration has lost control of the borders and was defeated by the Caravan Of Death To America By Demographic Displacement. Compare this to the Obama Administration when they decided to release 2, 000 illegal aliens: Obama did it not because he was forced to, but because he wanted to. T

o date almost all the illegals who came in the Caravan have since entered the United States, legally or illegally, and most released into the United States never to be seen again. None were sent back under the alleged plan to make them wait in Mexico. Another plan announced but not implemented, much like birthright citizenship reform.

Confusion over the current state of the plan reigns on both sides of the border: when Nielsen announced the move on 20 December, Mexico’s foreign ministry reluctantly accepted, although within days the foreign minister, Marcelo Ebrard, said he would need more information from US authorities. Guillén said Mexico had not formally accepted the plan.

[‘The US Can’t Dump People In Mexico’: Trump Asylum Policy In Doubt, by Sarah Kinosian, The Guardian, January 5, 2019]

The Trump immigration enforcement policy is only going from bad to worse. Those illegals from the caravan are now being released and not returned to Mexico.

The Department of Homeland Security (DHS) is releasing from custody more than 2,000 border-crossing adults and the children they arrived with over the course of a few weeks.

A DHS official confirmed to Breitbart News that the U.S. Border Patrol and the Immigration and Customs Enforcement (ICE) agency is releasing more than 2,000 family units caught at the U.S.-Mexico border, citing a lack of detention space.

The border-crossing adults and the children they arrived at the border with will be released and given a court date for an immigration hearing. The adults will be given ankle monitors, though the DHS official says the process of keeping track of border-crossers via ankle monitors is not effective.

Game, set, match, Deep State, but who is at fault? Not the Deep State, they could only do what President Trump allowed them to do. President Trump could have decided to follow this writer’s advice: primarily to hold Mexico responsible for the attack on the historical American nation, and our borders and use his executive authority, held by him and him alone, to see that the immigration laws of the United States were enforced, but he did not step up. (See my What Is To Be Done? Answer: Trump Needs To Use His Pen And Phone To Ramp Up Deportations And Stop The Invasion!, November 12, 2018 and Kirstjen Nielsen Admits Complete Failure On Honduran Invasion, October 14, 2018)

And as if on cue, the Trump Administration has been presented with another public defiance of immigration laws by the State of California. Another illegal alien has been appointed to a public office.

California is continuing to proudly thumb its nose at immigration laws, and the latest example of this is the appointment of an illegal alien to an official state position.

Mateo, now 33, was smuggled into the United States, illegally, when she was 14-years old. She is not protected by Barack Obama’s DACA executive order.

Despite this happening back in March of 2018, the Trump Administration decided that it will not enforce the laws of the United States in Mateo’s case for some strange reason. It is almost as if the Trump Administration is all hat and no cattle on immigration enforcement. This despite the fact that in Italy, Interior Minister Matteo Salvini is doing the opposite. He is going to put illegals and the politicians who support them in prison.

The times when mayors of Palermo, Florence and Naples could cash in on illegal immigrants are over, Italy’s Interior Minister Matteo Salvini said, vowing that those resisting the new policies will answer before law and history.
“Those who help the illegal immigrants, hate Italians,” Salvini said, blasting his opponents on Facebook and Twitter.

The minister from the conservative Lega Nord Party promised that the rebelling city heads will “answer before law and history.” And it’s no idle threat, as the former mayor of the Calabrian town of Riace is currently under house arrest on charges of aiding and abetting illegal immigration.

“Certain mayors look back fondly on the good old times of immigration, but for them the party is over!” Salvini said.

By “certain mayors” he meant the heads of Palermo, Florence and Naples, who he gave the choice of resigning from their posts.

There is no reason President Trump can’t do the same thing with Sanctuary City mayors, but for some reason, criminals like Oakland Mayor Libby Schaaf appear to be immune from criminal prosecution. And only Donald J. Trump is responsible for that. He can order criminal prosecution, but hasn’t. Why? Enquiring minds want to know.