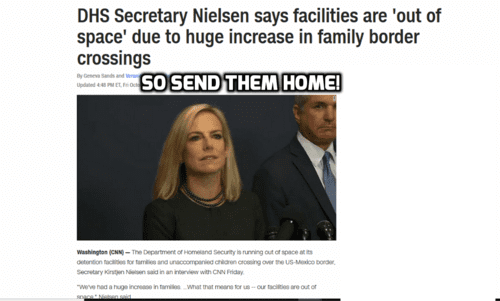 The results are in on bubble-headed bleached blonde Kirstjen Nielsen, Secretary of the Department of Homeland Security (DHS) attempt to prevent illegal aliens from Central America and else where from overrunning our borders.  Lady DACA has been a complete failure.  Since Deep State Jeff and Lady DACA conspired to end the practice of criminally prosecuting illegal aliens at the border, the surge of illegals from Central America has only increased.

Hundreds more Hondurans have joined a caravan of migrants moving toward the country’s border with Guatemala with hopes of getting to the United States.

Dunia Montoya is a volunteer assisting the migrants. She said Sunday that the group has grown to an estimated 1,600 people.

The group numbered just 160 Friday morning when it formed at a bus station in San Pedro Sula. Numbers quickly swelled amid local media coverage as Hondurans looking for the right moment to depart wagered that a mass exit could improve their chances.

Caravan participants plan to spend the night at a community center in Ocotepeque before attempting to cross into Guatemala on Monday.

And Lady DACA has abjectly surrendered.  She is now releasing illegal aliens into the United States to disappear and await the next amnesty instead of mobilizing the Department of Defense to build and hold these illegal aliens or fully implementing Expedited Removal to immediately return these illegals to Mexico.

The Department of Homeland Security is running out of space at its detention facilities for families and unaccompanied children crossing over the US-Mexico border, Secretary Kirstjen Nielsen said in an interview with CNN Friday.

[DHS Secretary Nielsen Says Facilities Are ‘Out Of Space’ Due To Huge Increase In Family Border Crossings, By Geneva Sands and Veronica Stracqualursi, CNN, October 12, 2018]

And the releases have begun, just as was planned by the alien smugglers and the Democrats who back them.

A sudden influx of Guatemalan families into Arizona has overwhelmed detention facilities there and forced the government to release hundreds of parents and children over the past several days, U.S. Immigration and Customs Enforcement said Tuesday.

Yasmeen Pitts O’Keefe, a spokeswoman for ICE, said the agency can no longer conduct basic reviews of migrants’ case files and travel plans without running the risk of exceeding court-imposed limits on how long children can be held in immigration jails.

As a result, ICE has been dropping off busloads of families at church shelters and charities, some with ankle monitoring bracelets, others with little more than notices to appear in court.

“In light of the incredibly high volume of [families] presenting themselves along the Arizona border, ICE no longer has the capacity to conduct [case] reviews” without the risk of violating child-detention rules, O’Keefe said in a statement. “To mitigate that risk, ICE began to curtail such reviews in Arizona beginning Sunday October 7.”

The first thing President Trump should do is immediately order the military forces of the United States to the border.   As many troops as possible should be assigned to block entry and patrol the border.  A sample of what could be done is to deploy the riverine forces of the United States military to patrol the Rio Grande.  The next step would be a advising Mexico that should they continue to allow third country nationals to illegally enter the United States from Mexican territory, then the United States will close down the land border Ports-of-Entry to all Mexican nationals, something we did when Mexico refused to extradite the killers of Special Agent Kiki Camarena.  Troops could also enter Mexico to identify and destroy drug and alien smuggling organizations, just as we did with the Punitive Expedition against Pancho Villa.

But the most powerful weapon available to President Trump is a complete shutdown of the entry of asylum seekers into the United States from Mexico.  I wrote about this a few short months ago.  [Fate Of Honduran Caravanners STILL Unclear, But Trump MUST Crack Down With Executive Options, by Federale, VDare, May 17, 2018]  The Supreme Court ruled that such orders under Section 212(f) of the Immigration and Nationality Act  sufficed for the Muslim ban. Little has improved since then except a short period of arrests and separations of illegal aliens, but the Lying Press and weak kneed RINOs put the kibosh on a policy that was discouraging illegal aliens.

The solution to the problem of the current invasion of the United States by illegal aliens now rests with the President himself.  He should expect no assistance from Lady DACA or Deep State Jeff.  He is mostly on his own.  But he is powerful, time to exercise that power.