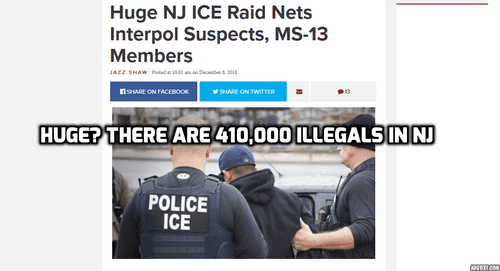 The Not So Good News, ICE Arrests 105 Edition: They're Only Taking Felons

Four individuals in the country illegally who have Interpol warrants based on crimes they committed in their home countries were among 105 foreign nationals taken into custody during a five-day operation conducted by U.S. Immigration and Customs Enforcement (ICE) last week in New Jersey. The operation, which was spearheaded by ICE Enforcement and Removal Operations (ERO), targeted at-large criminal aliens, illegal re-entrants and other immigration violators and was supported by ICE’s Homeland Security Investigations (HSI) and U.S. Customs and Border Protection’s (CBP) New Jersey Field Office.

This seems to the uninitiated to be good news. ICE and CBP components are working together to sweep up illegal aliens in the sanctuary state of New Jersey, giving a poke in the eye to illegal efforts to aid illegal aliens to remain in the United States.

However, there is a black pill to swallow with that news, because really, it’s no more than the Obama Regime policy on illegal aliens: only the most hardened criminals are being arrested. From the same ICE press release:

“These outstanding results, which were made possible by our officers and law enforcement partners, highlight the tremendous commitment that ICE ERO has to public safety throughout the state,” said John Tsoukaris, Field Office Director of ERO Newark. “Our focus has been and will continue to be on arrests of illegal aliens who have been convicted of serious crimes or those who pose a threat to public safety.” [Emphasis added]

Only arresting criminal aliens and those who pose a threat to the public was the first and only priority for the Obama Regime in deportations. If an illegal alien was not one of those two groups, they were beneficiaries of a de facto administrative amnesty, announced as the Morton Memos.

It is sad to see that the Trump Administration continues to adhere to the Morton Memos despite an early announcement that the emphasis on criminal aliens was ended and all illegal aliens would be subject to arrest.

Note what you have not seen of late: continuous and large-scale raids on employers. The last major employer sanctions raid was in August. Instead, ICE appears to be readily mau-maued by illegal alien advocacy groups, such as the recent case the Pizza Guy arrested in New York, but then released and appeals of illegal court orders ended.

Sadly, in the end, the Trump Deportation Force appears to be a pathetic extension of the Obama Regime Administrative Amnesty. If he’s not a convicted felon, an illegal alien remains unlikely to be arrested or deported. Meet the new boss, same as the old boss.