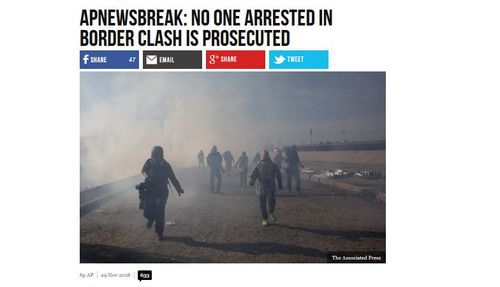 Enforcement Collapsing—No One Will Be Prosecuted For Assault On Border

First, the recent attack on the United States by violent illegal alien criminals and terrorists will go unpunished. Forty-two illegal aliens were able to penetrate a portion of the border on the weekend and were arrested. However, the U.S. Attorney for the Southern District of California, Adam L. Braverman, has decided that invading America and attacking Border Patrol Agents is something he can overlook.

No criminal charges will be filed against any of the 42 people associated with a caravan of Central American migrants who were arrested in a clash that ended with U.S. authorities firing tear gas into Mexico.

The Associated Press has learned that the federal government decided not to prosecute the migrants despite proclamations from the Trump administration that it will not tolerate lawlessness over the caravan.

[APNewsBreak: No One Arrested In Border Clash Is Prosecuted, by AP, Breitbart, November 29, 2018]

Worse yet, U.S. Attorney Braverman will not prosecute because some are sick and others are part of family units. So, according to Braverman, you can break any law if you are sick or have children.

Customs and Border Protection declines to say why no one was prosecuted but a U.S. official says many came as families—which are generally exempt. The official said that in other cases, authorities didn’t collect enough information to pursue charges, including names of the arresting officers. The official was not authorized to discuss the matter publicly and spoke to The Associated Press on condition of anonymity.

The official says two of the 42 were referred to the Justice Department for prosecution but charges weren’t filed because the accused had medical conditions.

That is not the only incidence of the Trump Administration rewarding illegal aliens. In another case, a long time and unrepentant illegal alien has been rewarded an H-1B non-immigrant visa.

A woman whose case drew national attention last year when immigration officials tore her from her children and her job as a nurse in Oakland and deported her to Mexico has a chance to beat the odds and return to the Bay Area, thanks to a lottery drawing and a recommendation from a U.S. consular officer.

The final decision, though, is in the hands of a Trump administration immigration agency. The agency made a preliminary decision in the woman’s favor last month, but the administration has taken a hard line on undocumented immigrants.

The woman, Maria Mendoza-Sanchez, has “become Exhibit A in the California-vs.-Trump immigration front lines,” said her immigration lawyer, Camiel Becker of Oakland.

Now Mendoza-Sanchez should be liable for a 10 year bar for the 23 years she lived illegally in the United States. And she did so flagrantly and without apology. While there is a waiver for illegal presence, there is no reason to approve a waiver for her flagrant contempt for American immigration law. It appears that Deep State operatives at U.S. Citizenship and Immigration Services (USCIS) and the Department of State (DOS), both of which have to approve the waiver are sabotaging immigration enforcement by succumbing to political lobbying by local Democrat politicians, the same politicians who will soon be demanding President Trump’s impeachment, like Dianne Feinstein.

“I’m proud to support her H-1B application that will allow her to reunite with her children and return to her nursing job, which the hospital has been unable to fill,” Feinstein said in a statement this week.

Note, there is no shortage of nurses in the San Francisco Bay Area. I know a number of nursing students, and there is a deliberate effort by local hospitals to avoid hiring and training recent nursing graduates.

Sadly, Deep State saboteurs at USCIS did not even ask for evidence to support a waiver claim, clearly USCIS answers not to President Trump, but to Dianne Feinstein and Mayor Libby Schaaf.

U.S. Citizenship and Immigration Services found her legally eligible on Oct. 2 without even asking for evidence — “miracle No. 2,” as Becker put it.

And the same happened with the DOS, which appears to be run by Dianne Feinstein.

The next stop was the State Department’s consular office in Mexico City, where, he said, her legal team handed over a packet of materials that included testimonials to Mendoza-Sanchez’s skills and the need for her services, and the volumes of media coverage. The team then presented her for an interview.

“It took much longer than I’ve ever heard of for this application process, but they came back and said they were recommending it for approval,” the attorney said.

The Trump Administration is also apparently answering to the criminal Libby Schaaf, who used this illegal alien as inspiration for her public announcement to illegal aliens that an ICE raid was in the works. Unsurprisingly, Deep State saboteurs in the Trump Justice Department are still refusing to prosecute Schaaf for her criminal actions.

Oakland Mayor Libby Schaaf said she was thinking of Mendoza-Sanchez and her abrupt removal after more than two decades of living in and contributing to the community when she warned immigrants in February of an impending raid by federal agents, provoking fury from Trump.

And the stories of Trump Administration failures continue. Now they are acquiescing to illegal interference in deportation proceedings by Federal judges.

A Kansas man who is fighting deportation to his native Bangladesh for overstaying his visa was given a reprieve until at least 2022 after an immigration judge agreed to consider whether he could legally stay in the U.S.

Syed Jamal, of Lawrence, had the first hearing of his recently reopened case Tuesday in Immigration Court in Kansas City, Missouri. Judge Glen Baker said he would review whether Jamal qualified for certain forms of deportation relief and set the next hearing for April 27, 2022, The Lawrence Journal-World reported.

One factor in Jamal’s case is whether a voluntary departure order that an immigration judge previously issued him is valid. If it is found to be valid, Jamal would not be eligible for a cancellation of removal.

Another of Jamal’s attorney, Michael Sharma-Crawford, argued the order was not valid because Jamal was not correctly notified by immigration regulations. Attorney Patricia Lacey, representing the Department of Homeland Security, argued Jamal had been properly advised regarding the order, making the notice valid.

The Trump Administration has completely failed in its legal strategy by refusing to appeal the decision by the judge to halt the deportation. Given that judicial review of removal orders is illegal, it appears that someone in the Department of Justice is sabotaging immigration enforcement.

To top it all off, it appears that the Trump Administration is negotiating with the caravan of illegal aliens with an intent to speed up the entry of these illegal aliens to make their asylum claims.

On Nov. 17, about eight CBP officials came and talked to us, along with Mexican immigration officials and members of the transition team for AMLO [Andrés Manuel López Obrador, the president-elect of Mexico]. They asked us what we needed, about how the process had been going. They gave us a tent and a table with chairs. Sometimes they give us bread and other snacks for while we work. The incoming government seems to be welcoming us.

We told CBP that we wanted them to start taking 15 numbers, or 150 people, a day. This would help us speed up the process. They acknowledged our request but haven’t changed anything yet. The wait time now with the caravan is anywhere from two months, could be up to three months. We are taking it in stride. This has all been so crazy—I just showed up from Nicaragua, and now I’m at the helm of this during what the world is seeing as a crisis.

[How To Organize Thousands Of Asylum-Seekers In Tijuana, by Sarah Kinosian, WaPo, November 28, 2018]

It appears that a complete collapse in the face of the caravan is likely in the near future, and for no apparent reason. Ridiculously, the Trump Administration is processing 100 of these asylum applicants and releasing them immediately. This is just the opposite of what the Administration should be doing. The policy should be that aliens should wait in Mexico for their hearings, as advised previously. However, even if the Trump Administration won’t follow my sage advice, they should only be processing that number of asylum applicants that can be fully processed, a hearing conducted, and the alien deported, all in custody for the full process. With expedited hearings, I estimate that only one alien a week should be processed. Sadly though, the Trump Administration is considering speeding up the processing and release of these illegal aliens.

I hope someone in the Administration reads this, and stops rewarding illegal aliens. Steve Miller, a nation’s lonely eyes turn to you in our hour of need.