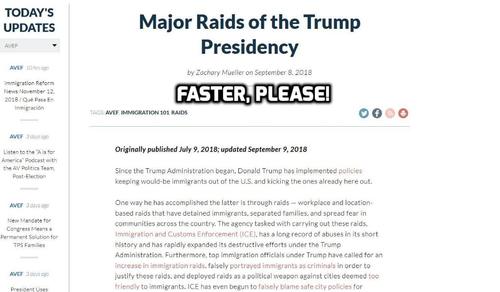 What Is To Be Done? Answer: Trump Needs To Use His Pen And Phone To Ramp Up Deportations And Stop The Invasion!

What is to be done? It was a question that V.I. Lenin asked at a significant turning point in the proto-globalist movement known as Communism. It was a time of great opportunity and a time of danger to the Reds. Similarly, the recent mid-terms represent a decision point for the salvation of America. It is another Flight 93 election, or more accurately, a Flight 93 time for executive action, time for a pen and a phone. For the most part the pretense of democracy in America is rapidly coming to a close; the question remains whether the remnants of Republican government bequeathed by our Founding Fathers can survive the machinations of the globalist terrorist organization known as the Democratic Party.

The terrorist party has seized control of the House of Representatives. Most on the right have “cope posted”, denying the importance of control of the House. Short-sightedly, they have concentrated on the most ridiculous and easily thwarted aspects of the program of globalist terrorism; impeachment and investigations. Impeachment is a battle President Trump will win handily, investigations by House committees can easily be thwarted by the simplest expedient of the Trump Administration just plain refusing to respond to subpoenas for documents and testimony. What will the terrorists do? Hold Attorney General Matt Whitaker in contempt? That did not affect Obama’s wingman, Eric Holder at all.

Nor will any significant number of Americans care about an official who was contemptuous of Congress. No one cares about these details of government practice anymore, if they ever did. The whole Watergate issue was contrived from start to finish, and no one believes the lying press. They no longer have the power and prestige they once had and used for villainy.

But what should the President do? While there are legislative options in the lame-duck session of Congress; I would humbly submit a 2+ year budget as the best way to lame the next House sessions until the end of November 2020. This is one of the most important actions the current House can take to hobble the radicals. A 2+ year budget will eliminate the ability of the radicals to place any budgetary riders to restrict immigration enforcement, foil the removal of transsexuals from the military, and protect DACA recipients, which is precisely what San Fran Nan Pelosi is planning. The lame-duck Congress could also pass border wall funding, immigration restrictions, expanded Expedited Removal, and asylum reform by offering a deal to the terrorists to protect DACA recipients. I think this has a good chance, but it’s not a certain thing.

More likely will be a return to an Imperial Presidency, and I mean that in the good sense. President Trump will be forced to govern by his pen and phone, but mostly a pen. And that’s a good thing. And there are some suggestions.

First, fully implement Expedited Removal. Sadly despite the fact that we are two years into the Trump Administration and Expedited Removal is still not fully implemented. Only certain illegal aliens encountered at the border or at Ports-of-Entry (POE) are subject to immediate administrative removal as provided for in the Illegal Immigration Reform and Immigrant Responsibility Act of 1996. Expedited Removal should apply to any illegal alien in the United States 2 years or less. However, to date, it is not being used in the interior of the United States. Why not? Ask Lady DACA.

By using his pen, President Trump has dealt a solid blow against the illegal alien Caravans Of Death To America By Demographic Displacement. But even this move was a half measure.

“Consistent with our immigration laws, the President has the broad authority to suspend or restrict the entry of aliens into the United States if he determines it to be in the national interest to do so. Today’s rule applies this important principle to aliens who violate such a suspension or restriction regarding the southern border imposed by the President by invoking an express authority provided by Congress to restrict eligibility for asylum. Our asylum system is overwhelmed with too many meritless asylum claims from aliens who place a tremendous burden on our resources, preventing us from being able to expeditiously grant asylum to those who truly deserve it. Today, we are using the authority granted to us by Congress to bar aliens who violate a Presidential suspension of entry or other restriction from asylum eligibility.”

In Section 208(d)(5)(B) of the INA, Congress specified that the Attorney General “may provide by regulation for any other conditions or limitations on the consideration of an application for asylum.”

Today’s new rule applies to prospective presidential proclamations, and is not retroactive.

Asylum is a discretionary form of relief granted by the Executive Branch on a discretionary basis to those fleeing persecution on the basis of their race, religion, nationality, membership in a particular social group, or political opinion. The rule does not render such aliens ineligible for withholding of removal under the INA or protection from removal under the Convention Against Torture and Other Cruel, Inhuman or Degrading Treatment or Punishment.

However, lacking was a full court press on the Caravan and fraudulent asylum claims. While it was a good move to prohibit asylum to illegal aliens, those future illegal aliens will just appear at a POE to make an asylum claim there. The President has the authority to similarly end asylum claims at POEs as well, but did not exercise that authority as recommended by your correspondent. Also recommended to the President was to impose upon those asylum applicants who appear at POEs the requirement to wait in Mexico for their scheduled asylum hearings before the Executive Office for Immigration Review (EOIR), the much backlogged immigration courts.

The President should also reconsider his decision to await legislation to deal with birthright citizenship for illegal aliens. Hans A. Von Spakovsky was correct when he detailed the President’s authority to interpret Federal statutes and the Constitution in the arena of illegal aliens gaming the 14th Amendment. Side note: why isn’t he at least a Deputy Attorney General?

While dealing with birthright citizenship is a long-haul issue and needs to be done, it will be in the courts for years. There are other areas where the President can act even more forcefully.

The President has full discretion in deploying Federal law enforcement, especially in two important areas, immigration law enforcement and terrorism law enforcement. Sadly, while deportations from the interior are up, there is much more the President can do to cause illegal aliens to panic and flee the country.

One major action that President Trump can take that will move the meter on immigration law enforcement is to have DHS immediately subpoena records for driver’s licenses issued to illegal aliens. In California alone there are approximately 1 million illegal aliens with those licenses, and there is an address in those records for agents to go to and make arrests. There is nothing stopping the administrative or grand jury subpoenas for those records from going out tomorrow, other than the unwillingness of Lady DACA to do her job. Nor is there anything to stop the Trump Administration from indicting and arresting local globalist terrorists obstructing immigration enforcement, including Mayor Libby Schaaf.

Furthermore, on other law enforcement fronts, the President can order an immediate Racketeer Influenced and Corrupt Organizations Act (RICO) investigation of Antifa, the armed globalist terrorist wing of the Democrat Party. Other law enforcement activity should be indictments of Hillary Clinton and Huma Abedin, James Comey, and John Brennan.

The President suggested to San Fran Nan that if she plays hardball, he will play hardball right back. Time to be pre-emptive in that aspect. Indictments, search warrants, grand jury subpoenas all round. Let the arrests begin. Let the Black Marias roll!