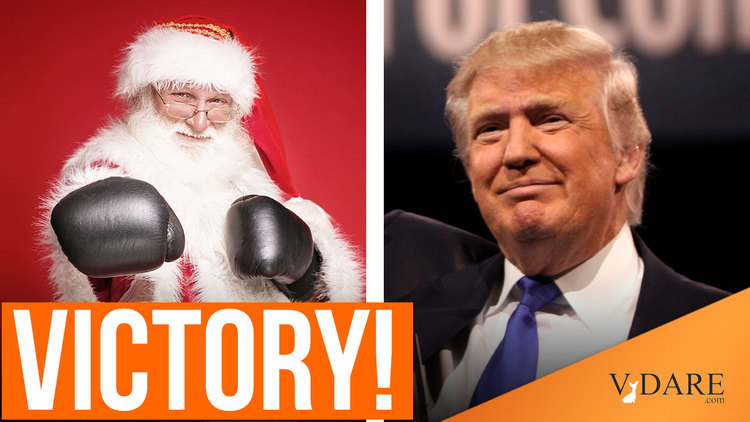 Earlier: Yes, Virginia (Dare), There Is A War On Christmas—Here’s Twenty Years Of Proof!

In the Washington Post, Gillian Brockell [Email her] writes

President Trump invoked the alleged war yet again this week after signing an executive order giving federal employees the day off for Christmas Eve. “This is a HUGE victory in the Democrats’ pathetic WAR ON CHRISTMAS, and I want YOU to be a part of it,” Trump announced in a fundraising letter.

Well, Mr. President, there was a real war on Christmas. It was in the 1600s, and it was waged by Christians — specifically Puritans — who hated the Dec. 25 observance of Jesus’ birth so much that they made it illegal in the Massachusetts colony for decades.

There really was a war on Christmas, Mr. President. It was waged by Christians, December 23, 2020

Ms. Brockell goes on to say that in the 17th century, working men in England and America tended to treat Christmas as an excuse for a "drunken riot" and like  Newsweek, recently, she is treating that Puritan War on drunkeness, et cetera, as equivalent to the modern War On Christmas.

The Puritans, who were all Christians, banned the observance of Christmas with drunken revelry for religious reasons, out of respect for Christianity and the Bible, rather than Christophobia.

In 1955, the pre-purge National Review contacted the New York School Board about their ban on Christian symbols:

By unspoken agreement, an officer of the Board did tell us, such aggressive symbols of religious imperialism as the manger, lighted candles and the visitation of the Magi are banned. But Santa Claus is allowed, she said soothingly; also reindeer and stars.And, presumably, candy sticks and jingle bells.

By 1995, John O'Sullivan reported, candy canes were banned, too.

Finally, in the Scarsdale public schools, there was an entire "holiday blackout," affecting both Christmas and Hannukah (but not the New Class holiday of Kwanzaa). The ban included not just Santa Claus and Christmas trees, but also "Jingle Bells," "Rudolph the Red-Nosed Reindeer," and even . . . candy canes. (They represent the staff of Christ, apparently.)

It's nonsense to think that candy canes are a Christian symbol, but it's widely believed by Christophobes: see War On Christmas: Candy Canes Banned Because They're Shaped Like A "J" As In "Jesus"