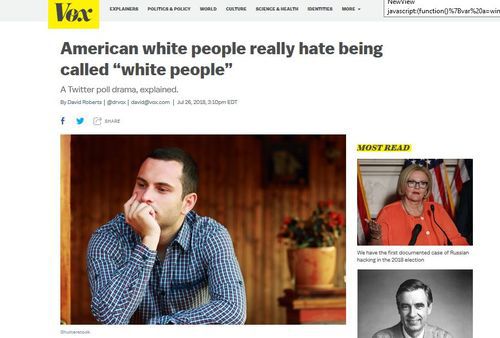 One of Richeson’s key insights is that reminders of coming demographic decline — the notion that America will soon become a “majority minority” country, with people of color outnumbering whites — not only cause increased hostility toward other racial groups (which might be expected) but also push white people in a conservative direction on seemingly unrelated policy questions like tax rates and oil drilling.

She also makes the point that the majority-minority narrative is bogus. By the time it is forecast to happen, who-knows-what demographic changes will have taken place, including changes in who gets coded as “white.” Since the idea is wrong and it freaks people out, she reasons, we should probably stop uncritically repeating it.

Why do social scientists and journalist say this all the time?

The idea that people of mixed race will suddenly choose in the future to self-identity as white only makes sense if you haven’t been paying attention to the topic of race for the last half century. Have they not heard of affirmative action? Have they not heard of anti-discrimination lawsuit payoffs? Have they not heard of Barack Obama? Do they not know that race is now based on self-identification? Have they not read their own publications? Do they think race in America still works like it did during during Showboat and Imitation of Life? Have they never heard of the Flight from White in which Latinos got themselves their own “ethnicity,” in which South Asians got themselves removed from white so they could get minority preferences, how Arabs talked the Obama Administration into endorsing removing them from the white category.

The only evidence I can think of for this popular idea among the Vox set (including Matthew Yglesias, who decided to register himself as Hispanic on the 2010 Census despite being 3/4th Ashkenazi and 1/4th Cuban-Spaniard film critic for the Communist Daily Worker) is