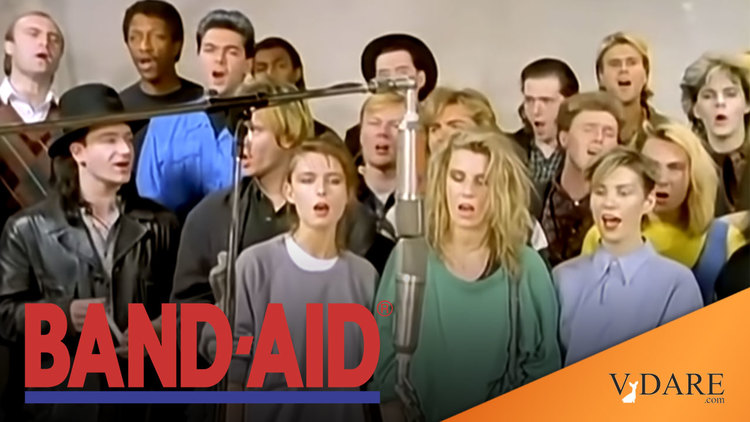 Remembering Band-Aid’s 1984 “Do They Know It’s Christmas”—Would They SAY It's Christmas Today?

Every Christmas, the radio replays the 1984 song “Do They Know It’s Christmas” by Band-Aid.

For those who may not recall, during the early 1980s, the Western media featured many tearful stories about the Ethiopian famine (though they neglected to point out that such mass starvation was not accidental, but was, in fact, a deliberate political policy as it often is in parts of Africa). In due course, a who’s who of British musicians, led by Bob Geldof, got together to write a Christmas song to raise money to help alleviate the famine. Their efforts were widely celebrated (Geldof earned an honorary knighthood) but I could find no evidence that they made any difference to the suffering in Ethiopia.

Although “Do They Know It’s Christmas” was surely written and composed in haste, the lyrics reflect a remarkable ignorance of the African continent.

“And there won’t be snow in Africa this Christmastime,”

Actually, it does snow in parts of Africa (skiing too).

“Where nothing ever grows, no rain or rivers flow”

Actually, some regions in Africa experience significant rainfall and are incredibly fertile. In fact, prior to the advent of Mugabe-like raids on white farmers, African farms were among the most productive in the world. Africa also has many flowing rivers, including the Nile, which is the longest river in the world.

The former Smiths lead singer, Morrissey, who is, incidentally, a vocal immigration patriot, [Morrissey blames immigration for 'disappearance' of British identity, by Oliver Duff, The Independent, November 29, 2007], said of Band-Aid. “It was an awful record considering the mass of talent involved. And it wasn't done shyly. It was the most self-righteous platform ever in the history of popular music.”

It’s hard to argue with that.

Nevertheless, “Do They Know It’s Christmas” was a smash hit, so much so that American pop stars felt strong pressure to put out a corollary “We Are The World” which you never hear on the radio anymore and for good reason. It was brutal.

The important thing to remember is that Band-Aid was a cause célèbre about feeding people in Africa. There was no talk of importing refugees from Africa to Britain.

More importantly, “Do They Know It’s Christmas” contains, by my count, 15 mentions of “Christmas” or “Christmastime”.

Can you imagine a bunch of pop stars getting together today to compose an original song that unabashedly mentions Christmas 15 times? It would never happen. We’ve fallen that far.