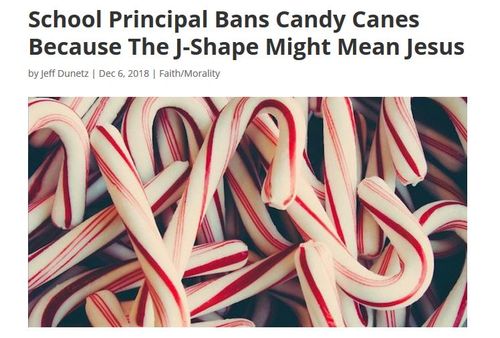 War On Christmas: Candy Canes Banned Because They're Shaped Like A "J" As In "Jesus"

This is via Jeff Dunetz, who is Jewish, but is on the side of sanity in the War On Christmas.

Dunetz, after noting the lady principle who banned candy canes is nuts, explains that she banned them because she thinks it's a Christian symbol, because they're shaped like a "J" as in Jesus. I've also heard of people saying that they look like shepherd's crooks, as in the shepherds who watched their flocks by night.

All wrong—the crooked handle is to keep them from falling off the tree.

This foolishness came from Omaha Manchester Elementary School principal Jennifer Sinclair who put out a list of things she was banning during the weeks leading up to Christmas. Sinclair outlined all her banned items in a letter home to parents telling students that they need to learn to be “inclusive and culturally sensitive to all of our students.”  Her list included:

Mainstream media coverage says that the principal who did it has been placed on leave–good!

The banning red and green stuff is an old story to us.