The Price of Mismatch—Affirmative Action Bad For Blacks, Worse For Whites

The Amy Wax to-do at Penn Law School reminds me of this article from The Atlantic:

The Painful Truth About Affirmative Action

Why racial preferences in college admissions hurt minority students — and shroud the education system in dishonesty.

… At the University of Texas, whose racial preference programs come before the Supreme Court for oral argument on October 10, the typical black student receiving a race preference placed at the 52nd percentile of the SAT; the typical white was at the 89th percentile. In other words, Texas is putting blacks who score at the middle of the college-aspiring population in the midst of highly competitive students. This is the sort of academic gap where mismatch flourishes. And, of course, mismatch does not occur merely with racial preferences; it shows up with large preferences of all types.

Research on the mismatch problem was almost non-existent until the mid-1990s; it has developed rapidly in the past half-dozen years, especially among labor economists. To cite just a few examples of the findings:

But in fact it is a largely invisible issue. With striking uniformity, university leaders view discussion of the mismatch problem as a threat to affirmative action and to racial peace on campuses, and therefore a subject to be avoided. They suppress data and even often ostracize faculty who attempt to point out the seriousness of mismatch. (See, for instance, the case of UT professor Lino Graglia, who was condemned by university officials after he observed that black and Mexican-American students were “not academically competitive” with their white peers.) We believe that the willful denial of the mismatch issue is as big a problem as mismatch itself. 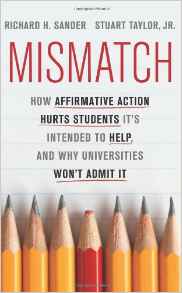 Personally, I doubt if Sander’s Mismatch Theory is that big of a deal for undergrads, except perhaps in some STEM fields. In general, it’s nicer to go to the most lavishly endowed college you can get into because expensive things (e.g., financial aid, small class sizes, tutoring, etc.) are nicer than cheap things. For example, if you can get into both private Stanford and public Berkeley, well, Stanford likely has nicer stuff for you than Berkeley.

On the other hand, I don’t know much about law schools. It sounds like which study group you get invited to join is a big deal.

So, while mismatch may not be that bad for the beneficiaries of affirmative action, it’s definitely bad for whites: not just for the ones who don’t get in due to racial preferences, but also for those who do get in and then have to walk on eggshells around the aggrieved and resentful beneficiaries who sense they aren’t as smart and lash out at anyone who reminds them of this fact.