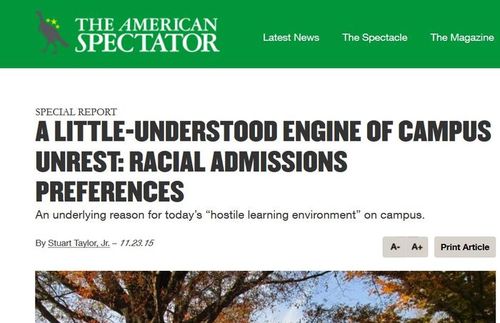 A Mismatch Theory for the Black Autumn

Stuart Taylor Jr. offers a mismatch theory for the Black Autumn in The American Spectator:

Only 1 to 2 percent of black college applicants emerge from high school well-qualified academically for (say) the top Ivy League colleges. Therefore, those schools can meet their racial admissions targets only by using large preferences. They bring in black students who are well qualified for moderately elite schools like (say) the University of North Carolina, but not for the Ivies that recruit them. This leaves schools like UNC able to meet their own racial targets only by giving large preferences to black students who are well qualified for less selective schools like (say) the University of Missouri but not for UNC. And so on down the selectivity scale.

As a result, experts agree, most black students at even moderately selective schools — with high school preparation and test scores far below those of their classmates — rank well below the middle of their college and grad school classes, with between 25% and 50% ranking in the bottom tenth. That’s a very bad place to be at any school.

This, in turn, increases these students’ isolation and self-segregation from the higher-achieving Asians and whites who flourish in more challenging courses. At least one careful study shows that students are more likely to become friends with peers who are similar in academic accomplishment.

Put yourself in the position of many Hispanic and especially black students (recipients of by far the largest racial preferences) at selective schools, who may work heroically during the first semester only to be lost in many classroom discussions and dismayed by their grades.

As they start to see the gulf between their own performance and that of most of their fellow students, dismay can become despair. They soon realize that no matter how hard they work, they will struggle academically.

It is critical to understand that these are not bad students.

But they also aren’t really good students, so the ideas articulated by protesters aren’t very intellectually impressive. In contrast, back in the 1960s, campus radicals were heavily Jewish. So the reigning theories, while puerile, were at least clever. And the clever radicals tended to attract some hot babes. So the Sixties were a big deal, because beautiful young women are always a big deal, as is whatever they think is cool at the moment.

In contrast, the shrieking black coeds of 2015 tend to be neither clever nor hot. And everybody kind of realizes that, deep down, that’s what they are shrieking about — their lack of either cleverness or hotness. But who wants to point that out and get shrieked at yourself? But the shrieking black coeds can kind of sense that they are coming across as thick, mentally and physically, which just makes them shriek louder: a feedback cycle.

But that raises the question of: Why Now?

Perhaps Mexican history can offer a clue. The central element of the Mexican political system is the six year term limit on the presidency. This gives each faction in Mexican politics hope: just live long enough and your guy will get to cut you in on the loot. But sometimes when the current faction in office is getting term limited out, as in 1976, 1982, and 1994, Mexico melts down as all the president’s men maneuver to set themselves up for post-presidential careers and lucre.

Maybe what’s going on at present — the Liberal Meltdown of 2015 — is that various timeservers in the Obama administration are trying to cause ruckuses on campus for which they’ll be seen as The Solution and get themselves hired for academic administration jobs?