Why Is the White-Black Gap So Huge in Law Schools? 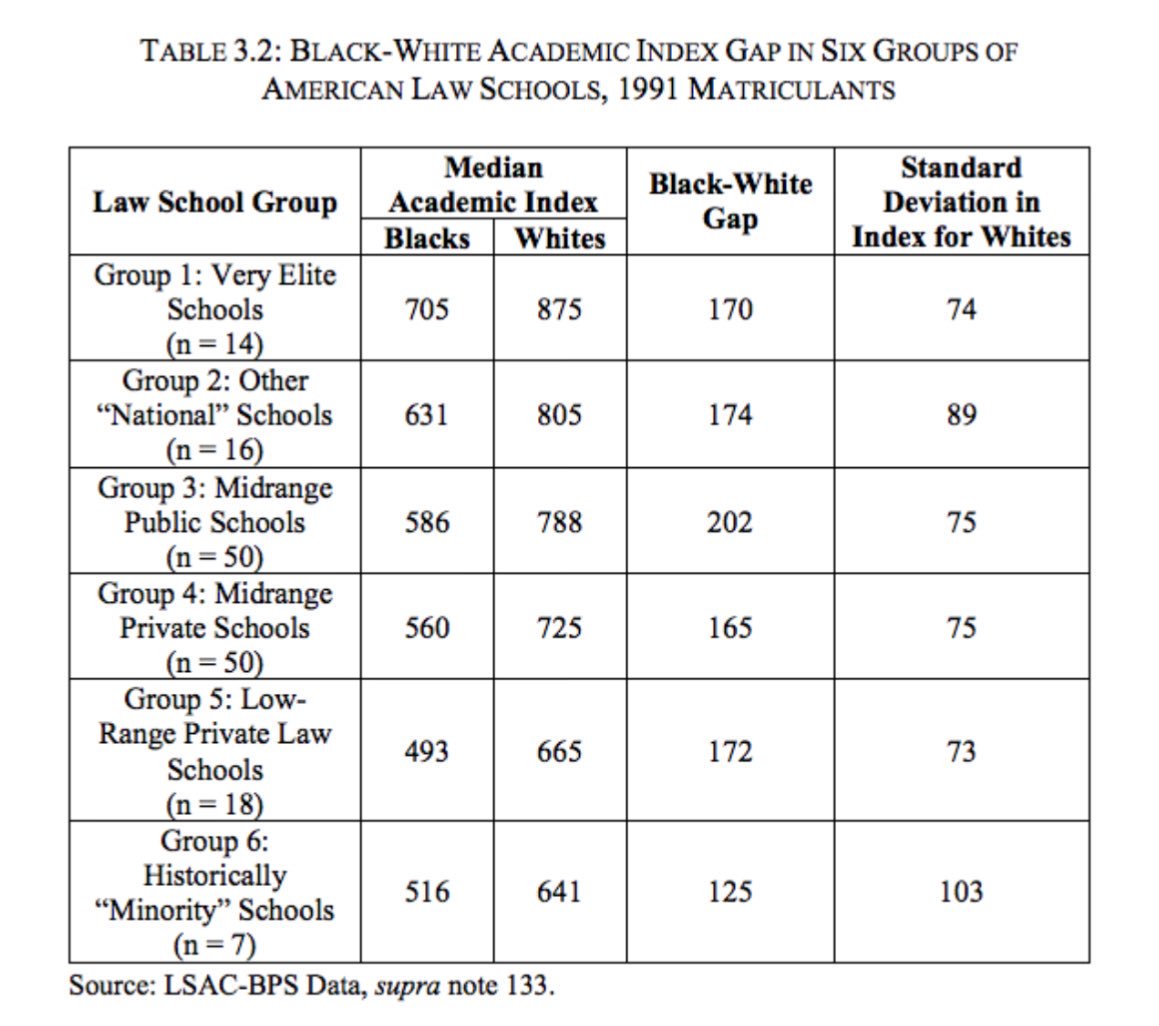 Random Critical Analysis points to UCLA Law professor Richard H. Sander’s 2004 article in the Stanford Law Review, “A Systemic Analysis of Affirmative Action in Law Schools.” [PDF] It features data from the Law School Admission Council’s study of 27,000 law students who started in the fall of 1991. It’s extremely relevant to this week’s Amy Wax Brouhaha over the dissident Penn law professor being denounced for, uh, either lying or telling the truth about black students’ performance at law school.

The race gaps at most tiers of law school are pretty huge: typically, a couple of standard deviations (compared to the white students’ s.d.). That’s really big.

One question is why the law school gap is so huge? Why is it two standard deviations instead of the usual one standard deviation seen most elsewhere? (I guess it’s because the index adds together an IQ proxy and a work ethic proxy.)

The median black student entering a tier one Top 14 law school has an index of 705, which is a little bit worse than the median white matriculant’s at a tier four “midrange private schools” index of 725.

This leads to immense gaps in the races’ chances of being admitted. For example, at the U. of Michigan Law School, which was the subject of the 2003 Grutter decision by the Supreme Court upholding racial preferences at a state school, here is the index table: However, the index over-predicts the black students chance of passing on the first try.

So the median white student at an elite (top 14) law school entered in 1991 with an 875 index, which suggests well under 5% chance of not passing the bar exam on the first try. The average black student at a top 14 law school entered with a 705, which is somewhere between 12% and 26%. A tier 2 “other national” law school, whites enter at 805 and blacks at 631, which suggests about a 30% chance of failing on the first try.

These giant race gaps explain a couple of otherwise puzzling questions. For example, Barack Obama was almost immediately seen at Harvard Law School as a potential First Black President upon showing up there in 1988 and demonstrating that he could hang with the smart white kids intellectually. There just aren’t many blacks who can do that.

Alan R. Lockwood calculated in a self published book that there is a good chance that Obama scored on the LSAT either at the 94th percentile (currently, a 166 score) or at the 98th percentile (171). He told biographer David Maraniss in 2011 that he had a B+ average at Occidental and an A- average at Columbia, or about a 3.5 overall. Currently, at Harvard Law School, the median student had a 173 LSAT and a 3.86 GPA (although I would guess those numbers were slightly lower in Obama’s day).

So Obama likely came in to HLS a little below average, but not much. This, apparently, caused a sensation.

Obama’s best friend at HLS was a very bright white guy named Robert M. Fisher, who had a Ph.D. from Duke in economics. Here’s Fisher’s career through 2016. Comparing Fisher’s career to Obama’s career shows you a certain amount about what White Privilege gets you these days.

Another thing we can see is why so many black law students (e.g., Michelle Obama) have such a chip on their shoulders: because the racial gap is so huge in law schools.