The New Yorker And The Empty Chair

Four years ago, when Barack Obama appeared on the cover of the New Yorker in the satirical picture featured right, there was a big scandal.(Although there's many a true word spoken in jest.)

As a result of his lackluster performance in the recent debate, this week he does not appear on the the cover of the New Yorker. His place is taken by Clint Eastwood's empty chair.

Query, if putting Obama on the cover is racist, does that mean leaving him off is not racist? I doubt it. You see, before Obama was elected, I wrote that anything you say about him is a gaffe. That applies to anything you don't say, and to cartoons in which he does not appear. 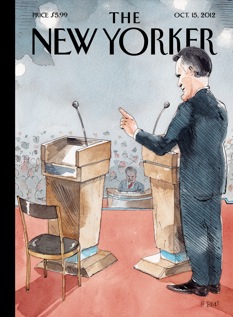