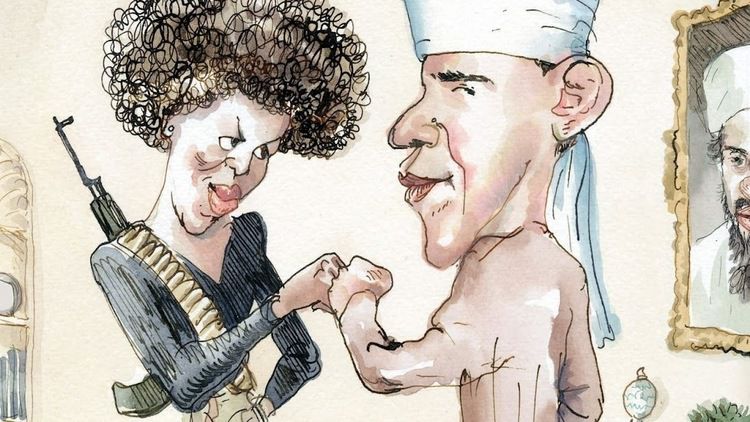 To watch the contortions over thatNew Yorker cover cartoon of the Obamas is to understand whom it is impermissible to offend in the America of 2008.

The cartoon is a caricature of Michelle as an urban terrorist in an Angela Davis afro with an AK-47 slung over her back and a bandoleer of ammo in the Oval Office doing a fist-bump with a Barack decked out in turban and Muslim garb. On the wall hangs a portrait of Osama bin Laden. Blazing away in the fireplace is the American flag.

"President Obama and First Lady—as Seen From the Right-Wing Point of View" might have been the caption. Phil Klein of American Spectator nailed it: "This cartoon is intended to make fun of conservatives as ignorant racists and essentially marginalize any criticism of Obama as moronic."

Unfortunately for the New Yorker, the cartoon misfired. Blow-ups are likely to be as pandemic in right-wing dorms this fall as were posters of "Che" Guevara in left-wing dorms in the 1970s.

Indeed, to a goodly slice of the media, this cartoon is no joking matter. Michelle and Barack had been dissed!

For 48 hours, editors Rick Hertzberg and David Remnick fended off attacks, assuring media interrogators the cartoon's purpose was not to satirize the Obamas but to satirize the caricature of Michelle and Barack in the mind of the paranoid right. Remnick insisted to The Huffington Post, "It's not a satire about Obama—it's a satire about the distortions and misconceptions and prejudices about Obama."

Why did progressives recoil? Because the more savvy among them sense that, like much humor, this cartoon was an exaggeration that contained no small kernel of recognizable truth.

After all, Barack did dump the flag pin. Michelle did say she had never been proud of her country before now. Barack did don that Ali Baba outfit in Somalia. His father and stepfather were Muslims. He does have a benefactor, Bill Ayers, who said after 9-11 he regrets not planting more bombs in the 1960s. He did have a pastor who lionizes Black Muslim Minister Louis Farrahkhan. Put glasses on him, and Barack could play Malcolm X in the movies.

And assume the point of the cartoon had been to satirize the Obamas. Why would that have been so outrageous?

Journalists, after all, still celebrate Herblock, the cartoonist who portrayed Richard Nixon with the body of a rat climbing out of a sewer.

Bill Clinton is still denounced as a racist for saying Barack's claim to have been consistent on Iraq was a "fairy tale" and for comparing his South Carolina primary victory to Jesse Jackson's.

Hillary Clinton has been compared to the sex-starved Glenn Close character in "Fatal Attraction." George Bush's verbal gaffes are endlessly panned by late-night comics and Comedy Central. But Barack gets the special-ed treatment. Our first affirmative action candidate.

The New Yorker made a "damn-fool decision," said George Lockwood, a lecturer on journalistic ethics.

David West of Brookings wailed to USA Today of the cartoon: "It's the mass media at its worst. It perpetuates false information, and it's highly inflammatory. ... It gives credibility to what's been circulating for months, and that's what makes it dangerous." [Mag satire panned; depicts Obamas as Muslim, terrorist, By Jill Lawrence, July 14, 2008 ]

But dangerous to whom? Again, it is only a cartoon.

Barack called the cartoon "an insult against Muslim Americans." His campaign called it "tasteless and offensive." That they are miffed is understandable. After all, 12 percent of Americans think Barack took his oath on the Koran, 26 percent think he was raised a Muslim, and 39 percent think he went to a madrassa.

Yet, the reaction of our cultural elites is the more interesting and instructive.

For it suggests that Obama is an untouchable to be protected. As an African-American, he is not to be treated the same as other politicians. Remnick and Hertzberg obviously felt intense moral pressure to remove any suspicion that they had satirized the Obamas. No problem, however, if they were mocking the American right.

Bottom line: If you wish to stay in the good graces of the cultural elite, don't mess with Michelle and Barack.

On display here is not only the sensitivity of the Obama folks to portrayals of him as a radical, but the sensitivity—the naked fear—of an elite magazine that it might be perceived as lending aid and comfort to any who would dare question the nobility and patriotic ardor of the Obamas.

If conservatives allow such a media to determine the weapons they may use and to limit the terrain upon which they are to be permitted to fight, they will lose this election. They have to peel the bark off Barack.

As for the New Yorker, it emerges from the episode as not just unheroic, but just another magazine desperate not to offend its readership or the people whose approbation it seeks as the measure of its moral worth.