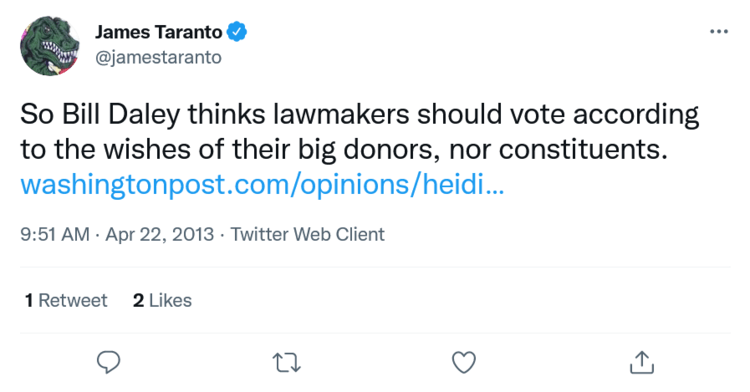 From the Wall Street Journal's James Taranto on Twitter:

So Bill Daley thinks lawmakers should vote according to the wishes of their big donors, nor constituents. washingtonpost.com/opinions/heidi…

My immediate, visceral response, was "Isn't that what the WSJ believes on immigration?"

"We get the same message from nearly every business executive who comes through our offices: Without immigrants, they couldn't possibly find enough willing workers to do the available work, no matter what the available wages. Yet Republicans seem intent not merely on increasing border patrols but also on further harassing law-abiding businesses that happen to hire illegals, as if anyone can tell the difference between real and fake immigration documents. Only Republicans would think it's smart politics to punish their supporters for hiring willing workers."

Except that the voters want the law enforced. And when the Journal editorialized against elitism [Are Americans Bigots? |Attacking the motives of those who disagree with elite opinion has become all too common, WSJ, August 10, 2010] I wrote

This is all very true, and would sound better coming from a newspaper that hadn't spent years attacking the vast majority of normal Americans who don't want mass immigration as "nativists." This includes personal attacks on Dr. John Tanton, Peter Brimelow, Heather Mac Donald, Michelle Malkin and even me. Much of this comes from James Taranto, who recently wrote a Best of The Web titled Logic 102 What kind of jerk would resort to ad hominem attacks? August 10, 2010.

Of course, there are two kinds of elites. One, represented by judges, law professors, and Mr. Obama, the Journal can claim to be opposing. The other, represented by Bill Gates, the Business Round Table, and employers generally, is the the group that profiteers from immigration. The Journal supports them absolutely.

However, bringing us up today, I'm obliged to admit that in this instance Taranto, who is capable of common sense if you can keep him off immigration, has it right here.

I want my money back.

I have had a long career in government and politics, but I don’t donate heavily to political campaigns. When I contribute, it’s because I know the candidate well or am really impressed with the person. Heidi Heitkamp was one of the latter: She struck me as strong-willed, principled and an independent thinker.

But this week, Heitkamp betrayed those hopes.

She voted to block legislation to make gun background checks more comprehensive. Her vote — along with those of 41 Republicans and three other Democrats — was a key reason the measure fell short of the 60 votes needed for passage.[More]

Yes, Taranto's right, this is evil. Daley, a corrupt Chicago pol from a long line of corrupt Chicago pols, gives a $5000 donation to a South Dakota legislator, and not only expects her to betray her constituents, but to betray them to their deaths. (That is what gun control means, as any unarmed Chicago householder, storekeeper, or taxi-driver could tell you—if they were still alive.)

All this on behalf of Obama, who is the apotheosis of the corrupt Chicago politician, in the interests of passing law that is more than usually unconstitutional.

Of course, if Daley could prove that Heitkamp had promised him, in return for his $5000, to vote for this bill, he would be entitled to his money back. He'd also go to jail for bribery, which is why campaign finance doesn't work like that.

I will repeat, however, that the same applies to the Republican donors who found themselves on the wrong end of immigration law enforcement when Bush finally got around to enforcing the law. It's the voters, not the donors, that the government is supposed to listen to.