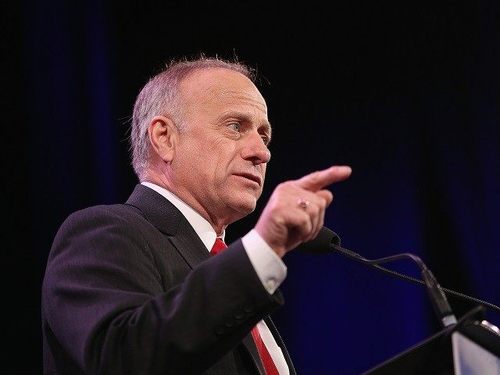 In order to turn things around on immigration, new leadership is needed in Congress.   Encouragingly, a very positive litmus test has even been approved for whoever might become Speaker of the House.  Julia Hahn, in another great article, reports that Steve King Threatens 'Battle' Over Paul Ryan Speakership [Breitbart, Oct. 18, 2015].

As Rep. Paul Ryan (R-WI)’s history of working for open borders has come under increasing scrutiny, conservative lawmakers have begun to publicly insist that any person who seeks to ascend to the Speakership must oppose amnesty and represent the vast majority of GOP voters who want to close the immigration valve.

A litmus test which actually defends American workers and the historic American nation?  That would be great.

As Politico recently reported , conservative Congressman Rep. Steve King (R-IA) warned that there will be a “major intraparty battle over immigration if Paul comes forward.” “A majority of the conference is on my side of this argument,” King declared. Politico added: “King said he would not support Ryan for speaker, noting that he has long opposed leadership candidates who are ‘pro-amnesty’ and that he is still backing Rep. Daniel Webster (R-FL)  to take charge of the House.”

Washington Watcher points out some problems with Webster, see here.

Polls show lawmakers could face severe criticism back home—as has already happened with Alabama’s Rep. Martha Roby (R-AL)—if they leave the door open to a Ryan Speakership. That is because Paul Ryan’s signature policy goal—allowing for the free movement of people and goods across America’s borders—is rejected by massive majorities of GOP voters.

Here are some usefuly polling stats.

A recent Pew poll found that only 7% of Republican voters want there to be more immigration into the United States. According to a poll from Kellyanne Conway, 80% of GOP voters think new immigration into the U.S. should be reduced by 90% or more. Across all voters—Democrat and Republican—Conway’s poll shows that only a microscopic 4% agree with Paul Ryan that any willing employer should be able to hire any willing worker regardless of where they live—the open borders credo.

As Ryan put it, we need to “have an open system where… the work that won’t be done by people who are already here can be filled by the people who want to come here and do those jobs.” “We want an economic based immigration system where…  labor and supply and demand can meet each other,” Ryan has said.

As Julia Hahn points out, it's the elite  pushing the Ryan candidacy.

The fact that the political class, and punditry class, are fairly unified in pushing Ryan for Speaker demonstrates the double standard for how Republicans and Democrats are expected to choose leaders. No one has ever suggested that the Democrat conference elect leaders who oppose core progressive values—such as the ability to have abortions or protecting the benefit programs established by President Johnson’s Great Society.

Ryan has worked extensively to both protect  the federal policy of adding millions of foreigners to U.S. voting rolls and to partner  with Rep. Luis Gutierrez (D-IL) to dramatically expand that policy. The desire of politicos in D.C. and Manhattan to push Ryan’s speakership likely stems from their support for these worker and voter importation plans.

If the roles were reversed, and an anti-amnesty Democrat was working with Steve King to stop immigration, there is no chance anyone in the media, the Democrat establishment, or the punditry would tell progressive activists to embrace an anti-amnesty Democrat Speaker. This double-standard is especially interesting given that there is vastly more Democrat voter support for immigration cuts than there is GOP support for Ryan-Rubio immigration expansions— the latter being virtually non-existent.

And, there are the donors.

GOP leaders’ support for the donors’ agenda, rather than their voters, explains the tensions within the GOP.  While Democrat leaders fight hard to pursue the priorities of their progressive base, GOP leaders often work with Washington media and pundits to belittle and sabotage the goals of the GOP base.

As Breitbart News has exclusively reported, not one Republican leader in the House or Senate is willing to support immigration cuts. None of the following leaders elected to serve the electorate is doing anything to respond to Republican voters, who by nearly a ten-to-one margin want to reduce, not increase, immigration.

Get that, ten out of every eleven Republican voters want to reduce immigration.  So why aren't more candidates endorsing that policy?

Under our current federal immigration policy, per the United States Census Bureau, more than 1.2 million immigrants are brought into the United States every year. That means that, every three years, immigration adds a new city the size of Los Angeles to the United States. This continues, without interruption, as a result of America’s visa policies, and will only cease if GOP leaders bring forward legislation to halt the green card gusher.

However, while GOP leaders let mass immigration continue without even remarking upon it, they work actively to push legislation the electorate opposes. For instance, while a Senate leadership internal messaging document  exposed by Breitbart News failed to make any mention of immigration whatsoever, it encouraged Republican Senators to meet with business groups to tout the GOP’s support for Obama’s unpopular globalist trade pacts, which Paul Ryan ushered through the House.

As Curtis Ellis, the Executive Director of the American Jobs Alliance, wrote  in a recent op-ed:

“It’s amusing how the corporatist media describe those opposing Ryan as ‘radical extremists.’ It’s amusing because if you look at Ryan’s record and his stated stand on the issues, you see it is Ryan who represents an extreme, radical minority within the Republican Party. This radical globalist minority supports a European Union-style free flow of people, goods and investment in a borderless world. The overwhelming majority of Republican voters take the moderate position that we must control immigration, have fair trade, not free trade and do what’s best for our nation, the United States of America… Aren’t the majority of Republicans entitled to leadership that represents their views?”