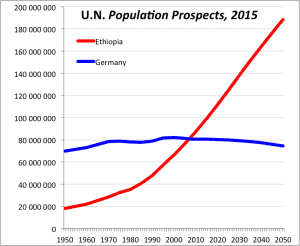 The New York Times has recently been auditioning other parts of the world for the flash mob role in Camp of the Saints 2016, such as a spate of articles about how cruel it is that Central American youths can’t overrun America’s southern border with impunity. But today there’s Ethiopia, where the rainy season wasn’t rainy this year:

Ethiopia, a Nation of Farmers, Strains Under Severe Drought

MIESO, Ethiopia — Every day, Yasin Mohammed Aliye stakes out a spot on his small farm to chew khat leaves, a stimulant, and guard against intruders.

The khat, he explains, helps to dull the hunger.

“We got just one day of rain each month during the rainy season,” Mr. Yasin said, referring to the days from July through September. “It should have been raining every other day. Now my harvest has failed.”

The green hills and full fields around here belie an alarming fact: This is the worst drought Ethiopia has experienced in more than a decade.

Many of the pseudo-Syrian refugees of 2015 are from Eritrea, Ethiopia’s quite similar neighbor: another peaceful leftwing dictatorship with a mix of Christians and Ethiopians. But there’s one big difference: Eritrea’s population is 5 million while Ethiopia’s is 99 million.

Ethiopia has added 58 million people over the 30 years since its famous famine.

Why no mention of this staggering statistic in the article?

See something, say something is racist.

(All data are from the United Nations’ World Population Prospects: 2015 Revision.)