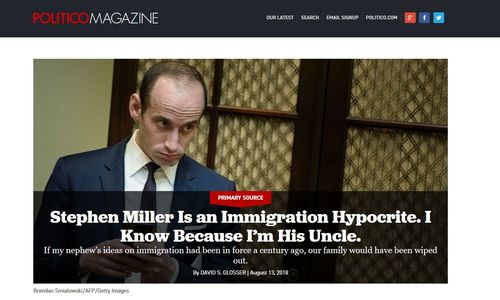 Stephen Miller's Uncle Raises Question: Should Jews Have Been Allowed To Immigrate?

Of course the  great Stephen Miller's uncle Dr. David S. Glosser [Facebook] didn’t think he was raising the question of whether Jews should have been allowed to immigrate to the U.S. when he wrote Stephen Miller Is an Immigration Hypocrite. I Know Because I’m His Uncle. If my nephew’s ideas on immigration had been in force a century ago, our family would have been wiped out(Politico, August 13, 2018).

Painfully obviously, Glosser didn’t think at all. His entire screed is an embarrassing immigration-enthusiast emotional spasm, so self-absorbed that he congratulates himself on his work for the notorious refugee racketeer HIAS (which has changed its name from the Hebrew Immigrant Aid Society as it ran out of Russian Jews) with absolutely no consideration of whether the importation of his sob-story Eritrean illegal, who apparently sought asylum at the Texas border despite passing through other countries and now has a wife and child but is still unemployed, is something his fellow-Americans should or actually do want.

I refuted Glosser’s underlying fallacy in Alien Nation no less than TWENTY-THREE (!!!) YEARS ago: just because Stephen Miller’s family made it on to the lifeboat, is he not supposed to point out that taking on more people will cause the boat to capsize?

Maybe Glosser has forgotten that part of Alien Nation?

But a more profound point was made by the late, and greatly missed, Lawrence Auster—himself, as he noted, “a descendant of Eastern Europe Jews”—

As a descendant of Eastern Europe Jews, I never would have imagined that to be descended from immigrants requires a person to have more allegiance to future prospective immigrants than to America; nor would most European-Americans who are descended from 19th and early 20th century immigrants imagine such a thing. But many Jews, as well as many Catholics, think otherwise. They think that because they come from immigrants, their sacred mission in the universe is to crusade for open borders and deny any ability on America’s part to have any say about who comes into this country.