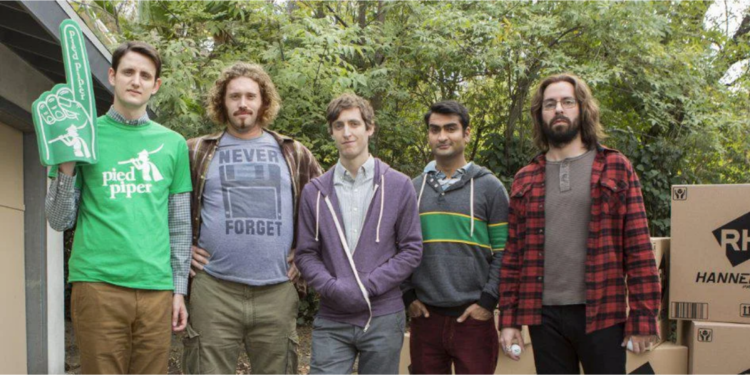 If nothing else, the HBO series Silicon Valley is aptly named. The show, which began its second season on Sunday night, is indeed a canny portrait of Silicon Valley; it depicts the antics of dweeby startup guys and haughty venture capitalists—Kara Swisher and Walt Mossberg even show up to host panels—with an impressive eye for detail. But in the first few episodes of Season 2, Silicon Valley doesn’t often capitalize on the chance to offer much of a critique.

“Rarely has a show had to do so little to find so much to mock,” wrote Slate’s Willa Paskin about Season 1. And this season, that is definitely still the case. …

But it’s unclear whether there is a meta component to these underdog stories—some sort of bigger commentary on the ways in which the Pied Piper employees (mostly white males) are not actually societally disadvantaged in the broader sense. The show certainly pokes fun at them, but it mostly just glorifies them: They may be weirdos, but their lives are pretty awesome.

The Ellen Pao gender discrimination trial is one of many recent stories currently advancing discussions about the treatment of women in Silicon Valley, so obviously that scrutiny should extend to Silicon Valley as well.

This piece is part of a recurrent pattern: the humorless scolds automatically assume that the comic creative artists are on their side, then nag them for not taking seriously their absurd fiascos like the Ellen Pao-Buddy Fletcher discrimination suit. Over the last two decades, Mike Judge has put together about as an out-of-the-closet anti-SJW body of work ((Beavis & Butt-head, King of the Hill, Office Space, and Idiocracy) as anybody in Hollywood (or in his case, Texas — he comes to California mostly to surf) since John Milius. But nobody notices since one of the pillars of the Left’s self-regard is the assumption that everybody cool and funny is on their side. Even Judge is assumed to be, as a matter of course, another anti-Straight White Maleist who will creatively benefit from Slate’s reminder to read Ellen Pao’s complaint to find out what’s really important about Silicon Valley.