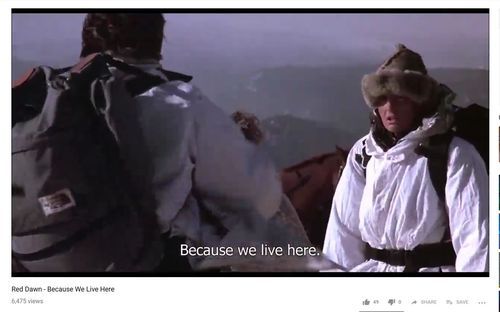 “I Would Have Done It About Mexico.” American Hero John Milius Denounces RED DAWN Remake 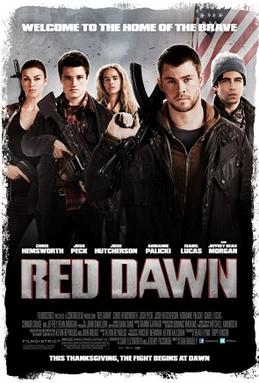 A new, Politically Correct remake of the iconic 1984 movie Red Dawn is being released today (November 21). John Milius, writer-director of the original and a true American Hero, is reportedly very ill with pancreatic cancer at the age of 68, but that hasn’t stopped him denouncing the whole thing in no uncertain terms. This article is dedicated to him.

It wasn’t for Arnold Schwarzenegger’s sake that I picked up his autobiography, Total Recall: My Unbelievably True Life Story. It was for anecdotes about the man who wrote such famous movie lines as “I love the smell of napalm in the morning” (Apocalypse Now), “Do I feel lucky?' Well, do ya, punk?" (Dirty Harry), and who directed Arnold in the iconic Conan the Barbarian.

I refer, of course, to John Milius, who both directed and wrote Conan. A self-professed “Zen fascist” and a long-time member of the National Rifle Association board, Milius was the true star of Arnold’s book.

In Total Recall, we learn that Milius defended Arnold when he was accused of being a Nazi by producer Dino De Laurentiis:

“I don’t like Schwarzenegger,” he told Milius. “He’s a Nazi.” Milius had already decided Arnold was perfect for the role and told Dino, “No, Dino. There is only one Nazi on this team. And that is me. I am the Nazi.”

And after finishing Arnold’s book, it is Milius (who is Jewish, in case you’re getting worried) that you want to know more about—whose life seems more authentic and more in line with the Nietzsche quote that accompanies the start of Conan the Barbarian: “That which does not kill us, makes us stronger.”

Alas, we’ll probably never get an autobiography from Milius, a man who tried to volunteer for the Marines during Vietnam but was rejected because of health problems. 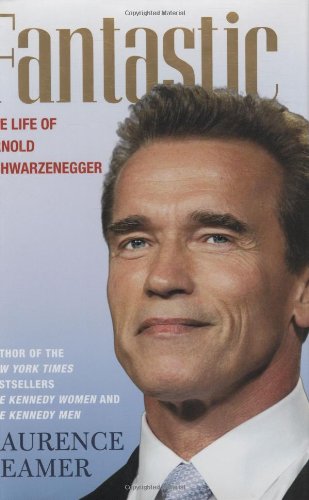 Milius was a rudely spoken, vulgar, literate, obsessive, burly, bearded, proud, gun-toting anachronism… Milius had been so weak and sickly that he was turned down by the military service he so admired, and had become a troubadour of lost traditional manhood.

There’s an atavistic, self-consciously primate quality expressed in much of Milius’s work, as if only by stripping away the shoddy veneer of civilization can the manly life be reborn.

Conan The Barbarian, which came out in 1982, helped cement Milius as one of the top directors in Hollywood. But he has a long record of powerful scripts and is famous for writing crisp, sometimes uncredited, dialogue. He came up with the famous monologue about the USS Indianapolis for Jaws; he helped George Lucas get his start as a director; and he was only individual who dared direct Red Dawn.

The late Patrick Swayze fondly recalled, in his 2009 autobiography The Time of My Life, the time he spent filming Red Dawn: 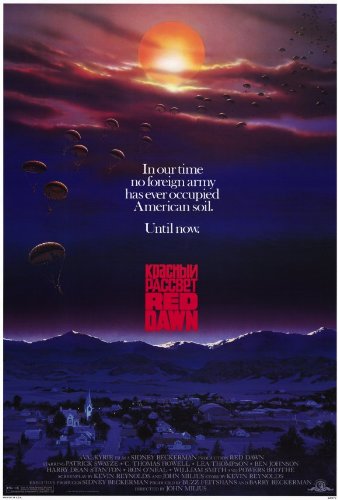 “You can call me the General,” Red Dawn director John Milius announced. “Swayze, you are my Lieutenant of the Art, and I’ll direct these little [expletive deleted by VDARE.com] through you.” With those words, Milius put me in charge of the cast of Red Dawn—Tommy Howell, Jennifer Grey, Charlie Sheen, Lea Thompson and others—for the grueling shoot in the mountains of New Mexico.

Red Dawn was a controversial movie right from the start. Five minutes into the film, Soviet and Cuban paratroopers float down to a small Colorado town and open fire with machine guns, launching World War III with an invasion on American soil. In the early 1980s, when we made Red Dawn, the Cold War was raging and fears of a Soviet attack ran high across America. But nobody would touch it as a movie plot—except Milius, who was just the man for the job.”

You can see why. New York Magazine’s David Denby sneered:

Red Dawn is an American fascist movie, a banana-cake fantasy for the far right. This is a film in which World War II is fun… Red Dawn is a call to self-discipline: The boys repress their tears and go out and die; they even learn to kill their own when necessary. The girls aren’t allowed to lighten things up and Milius won’t let any outsiders near the sacred fire: No black, Hispanic, or American Indian is going to drink his deer’s blood. 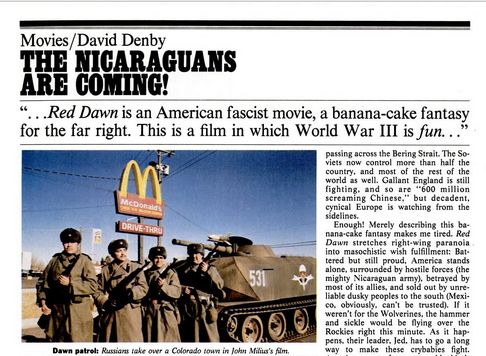 Well, don’t worry: in the upcoming remake of Red Dawn, the cast has the Politically Correct mandated diversity that we’ve come to love and expect from Hollywood.

More significantly, and ignominiously, the original story of the Chinese invading America—standing in for the now defunct USSR from the first film—was scrapped after filming was finished, with the North Koreans (!!) digitally interpolated...so as not to offend our Chinese overlords. [‘Red Dawn’ Villains Switched from China to North Korea, ScreenRants.com, November 21, 2011] 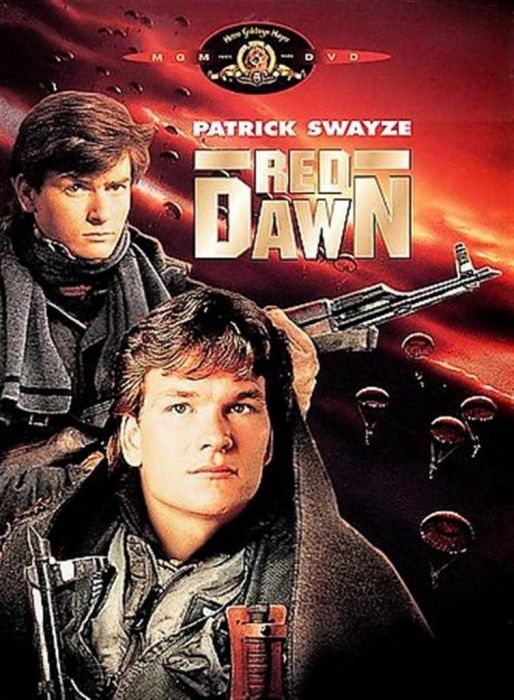 "I think it’s a stupid thing to do. The movie is not very old," says Milius, who’s not involved in the new film but was given a chance to read the new script. "It was terrible. There was a strange feeling to the whole thing. They were fans of the movie so they put in stuff they thought was neat. It’s all about neat action scenes, and has nothing to do with story."

In the original film, the Soviet Union has invaded the continental United States, and a group of young men and women (Patrick Swayze, Charlie Sheen, Jennifer Grey) band together as a guerrilla group, nicknamed the Wolverines, to fight off the occupiers. In the 2010 edition, directed by Dan Bradley and starring Chris Hemsworth and Jeffrey Dean Morgan, the villains are the Chinese.

While the new baddies might tap into American fears about a rising China, to Milius it makes little political sense. “There’s only one example in 4,000 years of Chinese territorial adventurism, and that was in 1979, when they invaded Vietnam, and to put it mildly they got their [butts] handed to them,“ says Milius, noting that China built a wall to separate itself from invaders. “Why would China want us? They sell us stuff. We’re a market. I would have done it about Mexico." [Original 'Red Dawn' director takes aim at the remake, March 26, 2010]

Mexico, eh? Judging by the state of California, Arizona, Texas and, increasingly, the entire United States, Milius might be onto something.

Milius has gone even further, confirming the political style that James Kirkpatrick wishes would represent America:

For example, here's Milius on stopping murderous drug traffickers in Mexico: "We need to go down there, kill them all, flatten the place with bulldozers so when you wake up in the morning, there's nothing there," he said in a phone interview. "I do believe if you have a military, you use it."

Or Rush Limbaugh: "I was watching Rush Limbaugh the other night, and I was horrified. I would have Rush Limbaugh drawn and quartered. He was sticking up for these Wall Street pigs. There should be public show trials, mass denunciations and executions."

In Milius’ version of Red Dawn, Patrick Swayze’s character is preparing to execute a captured Russian officer. Asked by one of the guerrillas he leads what is the difference between us and them, he coldly responds: “Because we live here.”

That is exactly what American patriots need to be prepared to say in America today.

Paul Kersey[Email him] is the author of the blog SBPDL, and has published the books SBPDL Year One, Hollywood in Blackface andEscape From Detroit, and Opiate of America: College Football in Black and White.