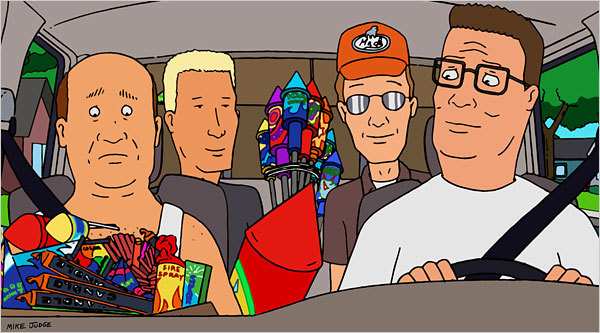 Mike Judge—King of the Hill

One of the lesser known but more interesting figures in American pop culture is Mike Judge. He's the man behind the increasingly impressive animated television series King of the Hill, which will broadcast its 200th episode in May. 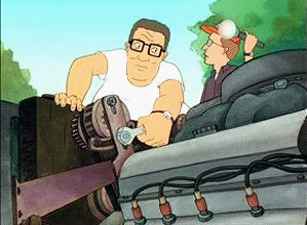 When it first premiered on Fox, King of the Hill was derided as a slow-paced imitation of the frenetically brilliant The Simpsons because it features less than half as many jokes per episode. But once King of the Hill matured, the insightful and unusual quality of its low-key humor became evident. It now must rank among the finest sit-coms in television history.

Judge also created Beavis and Butt-Head, which was a controversial sensation on MTV in the mid-1990s. And he wrote and directed the 1999 live action comedy movie Office Space, which flopped at the box office but has since attained cult status on DVD.

Judge, who lives in Texas, is that rarity in the entertainment business: an unabashed populist conservative. Most strikingly, he has demonstrated a deep, sympathetic interest in the welfare of the white American blue-collar man.

Hank Hill, hero of King of the Hill, exemplifies the traditional American male virtues in an age that holds them in contempt. Much of the comedy stems from Hank (who wistfully remarks of Ronald Reagan, "I miss voting for that man") doing battle with the pretensions of Northeastern liberalism and the rapacity of globalized corporatism. Judge says of Hank, "He's probably the most like me of all my characters."

King of the Hill displays a lot of courage. For example, Hank's neighbor Kahn Souphanousinphone Sr., an ultra-competitive and graspingly materialistic East Asian immigrant, is one of the very few nonwhites on television who is depicted as a deplorable human being.

Of course, the show isn't suicidally brave. It's not a coincidence that Kahn frequently insists that he's a (non-Hmong) Laotian. There are so few immigrants from lowland Laos in America that they lack the kind of political muscle that more numerous immigrant groups would have exerted against any sit-com that dared cross them.

The main themes that interest Judge, who has a degree in physics and who worked for a number of years as an engineer, are IQ, class, masculinity, and their complex interplay in modern America.

In Idiocracy, Luke Wilson (Old School) plays the most dispensable private in the U.S. Army. He is chosen to be a guinea pig in a "Human Hibernation Project", but due to a bureaucratic snafu, he's not awoken for hundreds of years. He discovers, to his horror, that's he's now the smartest man in America.

Dysgenic breeding and rampant commercial degradation of the culture have made real life in America as mindless as a World Wrestling Entertainment Smackdown. The masses are kept from starvation by a passive-aggressive computer named Omni-Pal, "which no living human being is smart enough to maintain, repair, or even question."

Judge's plot is explicitly eugenic. A review of an early draft of his screenplay with Etan Cohen says:

"There's also a hilarious opening scene of the script that perfectly sets up the eventual future in the film. It deals with a conservative, smart, and well-to-do yuppie couple who plans and over-analyzes every aspect of their life, mainly that of the decision of when to have a child. Simultaneously, on the right side of the screen appears a 'white trash' couple who has lots of sex without protection, and over generations and generations, produce more and more dumbasses, 'multiplying like rabbits, drowning out the yuppie couple.'"

NARRATOR: "Evolution does not necessarily reward that which is good or beautiful. It simply rewards those who reproduce the most."

This initial draft sounds funny but crass. Judge's views of intelligence are more complex than this suggests, so I suspect that Idiocracy will turn out to be more humanely insightful when it finally gets to the screen, probably this October.

For instance, as Kevin Michael Grace pointed out to me, Judge insisted that his King of the Hill screenwriters and animators take pains to show that Hank and his three beer-drinking friends are very good with their hands. In cognitive science terms, that means they have fine 3-dimensional visualization skill—which is not a talent that sitcom-writers typically value highly.

On a more profound level, King of the Hill shows how tradition can help economize on IQ. Like many sit-com dads, Hank isn't terribly clever. Yet, in sharp contrast to Homer Simpson and the rest of the Doofus Dads on TV, Hank is, in his modest way, wise.

While hardly flawless—he's a comic cartoon character, after all—Hank is a better decision-maker than the higher-testing bureaucrats, educrats, and executives he clashes with because he's absorbed the best lessons about how a man should live his life from an out-of-fashion older American culture. 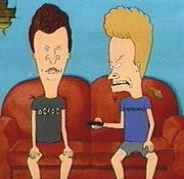 In contrast, the moronic Butt-Head and the idiotic Beavis are two 14-year-olds whose upbringings their single moms delegated to the television set they watch incessantly. Pop culture hasn't inculcated in them any wisdom whatsoever. The only reason that, on the rare occasions when they get off their couch, they even survive their misadventures is the special providence that God proverbially extends to drunks and knuckleheads. No television show ever lampooned the destructive impact of its own network more brutally than this.

Judge's 1999 movie Office Space is an acutely observed satire on white-collar work. Peter, a young man of average intelligence but above-average masculinity, loathes his paper-pushing job in the accounts payable department of a big corporation in Texas, where he's constantly niggled at for forgetting to put the new cover sheet on the TPS reports.

Depressed by the perky pink-collar women clerks around him, Peter envies his lowbrow neighbor Lawrence, who works in construction as a drywaller:

Peter Gibbons: Let me ask you something. When you come in on Monday, and you're not feelin' real well, does anyone ever say to you, 'Sounds like someone has a case of the Mondays'?

Lawrence: No. No, man. … I believe you'd get your ass kicked sayin' something like that, man.

Yet the consultants who have been hired to downsize and outsource the department to Singapore are impressed with Peter's masculine charisma and mark him out for an upper management career for which he has little interest.

Spoiler Alert: In the happy ending, the office building burns down and the corporation goes bankrupt. Peter switches to a blue-collar career, working alongside Lawrence, the drywaller, clearing the rubble. He likes working outdoors with his hands and turns down an offer to return to a demeaning cubicle job.

Sadly, that satisfying conclusion is less plausible in 2006 than even in 1999. As Ed Rubenstein reported recently, 27 percent of drywallers in America are now illegal immigrants, according to the Pew Hispanic Center. In Mike Judge's Texas, the percentage is probably quite a bit higher.

Of course, we're not supposed to worry about what kinds of jobs and what kind of wages our fellow citizens like Peter and Lawrence are going to find in the future.

As President Bush explained on his recent visit to India, they'll just have to get re-educated for something more sophisticated.

The perceptive blog Your Lying Eyes points out:

"The prospect of transforming millions of coarse, hard-living, male blue collar workers into gentle, accommodating service workers perfectly interchangeable with women may be a feminist's dream, but the reality would be quite different. Most likely men will begin to drop out of the work force and just let the women do these jobs."

Indeed, that's already happening. The New York Times reported that the jobless rate among African-American men age 22-30 who didn't attend college is now 50 percent, up from 34 percent a quarter of a century ago. Among whites, it's 21 percent, up from 16 percent. [Plight Deepens for Black Men, Studies Warn, By Erik Eckholm, March 20, 2006. See chart]  (Those numbers are higher than the normally reported unemployment rates because they include young men who have given up looking for work or who are imprisoned.)

"Right now our real-estate boom has kept men busy building things, but once that cools off … the growing crisis will soon become apparent. The notion that education—acquiring new skills for the new economy—will relieve this crisis is just plain silly. Computer programming jobs are already being outsourced in droves—exactly what skills are these guys supposed to acquire in order to remain competitive in the global marketplace? Bioengineering? Nuclear physics?"

Hopefully, Mike Judge will explore them in the future.

Because it's not likely that anybody else in the entertainment business will.