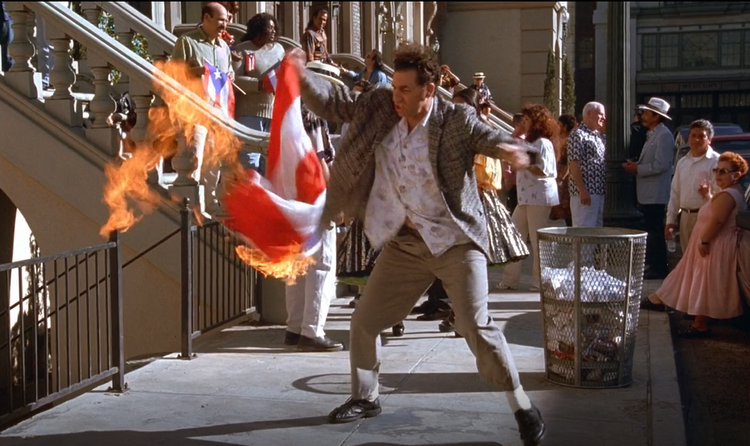 Parading Through America: Puerto Rican Day And The National Question

Sunday, June 10, is New York City's annual Puerto Rican Day parade. In the past, the parade has been marred by ugly events that would be hard to imagine at say...the St. Patrick's Day parade. The St. Pat's parade is run by the Ancient Order of Hibernians, a Catholic organization that contains more police  and firemen than criminals and which keeps getting in trouble for its resistance to homosexual activists.

In contrast, Puerto Rican Day has been associated with, for example, not only wolfpacks attacking young women while the police stood by, but also repeated crude attempts at political repression, notably of VDARE.COM friends Scott McConnell and Taki Theodoracopulos.  So today is a good time to review the subject of Puerto Rico and its relationship to the United States and the National Question.

From there, things rapidly go from bad to worse. Puerto Rican bystanders notice the Caribbean conflagration and voice their displeasure. Then they chase Kramer down the street. The chase and burning incites a riot. Mayhem ensues. One of the victims of the riot turns out to be Jerry's car, which the mob attacks. To which Kramer remarks: "Well, you know, it's like this every day in Puerto Rico." [Show transcript]

In real life, needless to say, the episode raised the ire of the usual suspects in the ethnic grievance industry. [Protests hit NBC/"Seinfeld" racism, By Carlos Rovira, Workers World, May 21, 1998] And, again needless to say, NBC responded cravenly. It issued an apology and has never aired the episode since. In syndication, many stations declined to air the episode. The Season 9 DVD has yet to be released, so it remains to be seen if this capitulation will extend into the 21st century.

Why is the Seinfeld thing so funny? Because it reflects reality. Everyone kinda knows that it wouldn't take much to set off Puerto Rican paraders..... and here Kramer does it in spades.

Entertainment aside, however, the episode does raise a few questions. Is it like this every day in Puerto Rico? Why do we have so many Puerto Ricans in the US? Do we need more? What is the history of Puerto Rico in relation to the US?

I mean, why are we doing this?

Puerto Rico was acquired by the US in a fit of jingoism in 1898, after the Spanish-American war. It attained commonwealth status—a sort of quasi statehood - in 1917. With this, Puerto Ricans became US citizens with the attendant right to move about the US at will. Within the past 100 years about 25% of Puerto Rico's population has moved to the US.

Now, back in 1898, imperialism was popular in the world at large. It was thought every great nation should control colonies hither and yon.

As an American, empires never made much sense to me. The colonizer has to subdue the colony at great expense. Then it has to either brutally put down any opposition by the natives, or bribe the population at large. It must bribe the population itself, because just bribing the elites results in their being discredited as Quislings, making the imperial project even more dicey. Of course, we have chosen mass bribery. In the book Pay to the Order of Puerto Rico

, authors by Alexander Odishelidze and Arthur Laffer estimate that Puerto Rico is costing the US $22 billion, a year.

There is a third way you can make territorial acquisition make sense; population transfer has to take place. This is the way men have dealt with each other since time immemorial:

That's the basic formula. There can be permutations to this recipe but the basic thrust is always the same: get your people into a disputed territory creating a real and lasting claim to said territory. This is why the US government had homesteading programs for the west.

Homesteading is policy where settlers are given government land in frontier areas so long as they live on and improve the land.

Yet today we see in effect the exact opposite of these policies. We see policies designed to import hostile hordes into America and rend it asunder.

The elite has abandoned its charge to protect and defend America. Into this vacuum steps anyone with a will to pursue their own interests.

What we see before our eyes in New York is not so much a parade, but an arrogant marauding throng, daring anyone to step in their tribe's way.

But the serious question we have to ask is, why did we allow this?  And why are we trying to replicate the Puerto Rican debacle by in effect merging the US and the Third World? If Puerto Rico has been a US possession since 1898, a Commonwealth since 1917, a major part of New York society since the West Side Story days of fifty years ago, and assimilation still hasn't happened, then why do we think that moving half of Mexico north of the border will be anything but a disaster?

It may be like this every day in Puerto Rico, but does it have to be the same here.

Roger Williams will be spending Puerto Rican Day a long way from either New York City or San Juan.