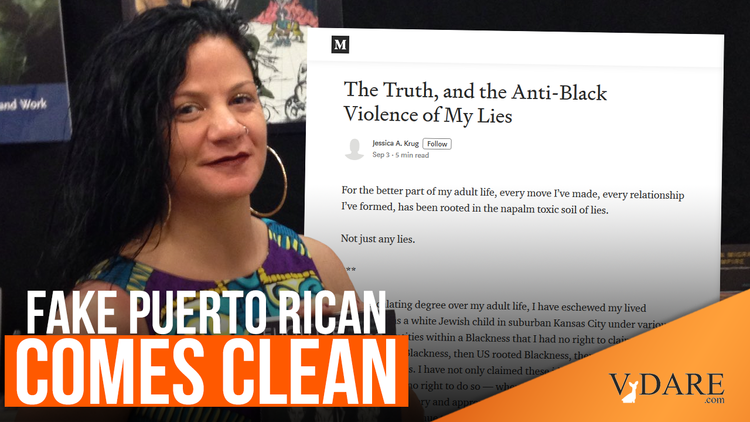 Earlier: White Jewish Professor Pretends for Years to be Puerto Rican: Did She Do It for the Affirmative Action or for the Giant Hoop Earrings?

George Washington U. tenured history professor Jessica Krug, a white Jewish lady who pretended to be a black Puerto Rican from the barrio, has resigned after outing herself to get out ahead of being exposed by rival colleagues who were about to pounce. No word yet on the make-up of her buyout package.

Jessica Krug ran away from being Jewish because being a Boricua was good for her academic career. As a Jewish woman who — I’m guessing — is not a first-rate scholar, she would have been a dime a dozen on the history job market, and likely would be teaching on a series of one-year contracts at Multidirectional State Universities, with little or no hope of tenure.

As a Puerto Rican woman of color, though, she was a star. Different grading curve and all that. But of course, she couldn’t just enjoy her ill-gotten gains, and published her books that few read (other than her students, who were probably required to buy them for her classes). No, she had to be a public figure, too: thus the “Jess Bombalera” video, calling the NYPD a “colonialist occupying force,” and now this Columbia University panel in which she defends the machete killing of a 15-year-old boy as a “collaborator.”

How long before George Washington University does the smart thing, and buys out her tenure? When I mentioned this in an earlier thread, another commenter made the eminently sane suggestion that the school keep her, but gradually shrink both her role and her office accommodations (perhaps thinking that eventually, she’ll leave of her own accord?). The public airing of the Columbia panel video makes clear the problem with keeping Juanita Epstein on formally, but marginalizing her: every new disclosure, every newly-discovered rabble-rousing, identifies her as “an associate professor at George Washington University.” Bad for the brand, no? And the longer she stays, the more people will ask how GW came to hire someone like that in the first place. And, as Steve notes, that is one can of worms no one — least of all GW — wants opened.

The editorial director who helped bogus-black college professor Jessica Krug publish a book said she is “sickened, angered, and saddened” by the years of being lied to — and is donating proceeds from the book to cheated non-white scholars.

“I have been sickened, angered, and saddened by the many years that she deployed gross racial stereotypes to build her fake identity

, and the way that she coupled her lies with a self-righteous policing of racial politics within the Black and Latinx circles that she intruded upon,” Fosado wrote in a post on her company’s website.

From the beginning of their relationship, Krug told Fosado that her surname was pronounced “Cruz” — claiming it was a “transcription mistake” when her “grandparents came to this country from the Caribbean,” the editorial director wrote. …

“There’s also the shameful sense that, as someone who labored to support her work as her acquisition editor, I helped publish the work of someone who, early in her career, took funding and other opportunities that were earmarked for non-white scholars,” she said.

“Krug’s scholarship may not have ever existed without the funding that was inseparable from her two decades of lies.”

In other words, it was an affirmative action book.

Krug’s book “did not generate a profit” and its “expenses were more than its revenues,” Fosado said.

“Despite that, Duke University Press is committed to moving all proceeds from the book to a fund that will support the work of Black and Latinx scholars,” the editorial director announced.

EXCLUSIVE: 'I have never met anyone more racist than her!' Musician reveals he went on a 'Tinder date from hell' with race faker Jessica Krug who spewed her hatred for white people and attacked him for being 'passive' in the 'war' on gentrification

By BEN ASHFORD FOR DAILYMAIL.COM

A Tinder user has revealed how bogus black professor Jessica Krug spewed anti-white hate and lectured him for hours about systemic racism on a ‘date from hell’.

Musician Ken Pazn, 30, was expecting an afternoon of flirty fun after he swiped right on Krug’s profile and suggested a romantic stroll in Manhattan.

But he was soon regretting the February 2018 hook-up after Krug began boasting of her hatred of white people and attacked him for being too ‘passive’ in the ‘war’ on gentrification.

‘I have never met anyone more racist than her,’ Pazn, who is Afro-Latino, told DailyMail.com in an exclusive interview.

‘It was all F whites, F the police, F capitalism, all of that stuff. You could not believe the look on her face when I revealed I had friends of all races.

‘I feared she was ready to fistfight me if challenged any of her views. I would have liked some physical action – but not that kind.’