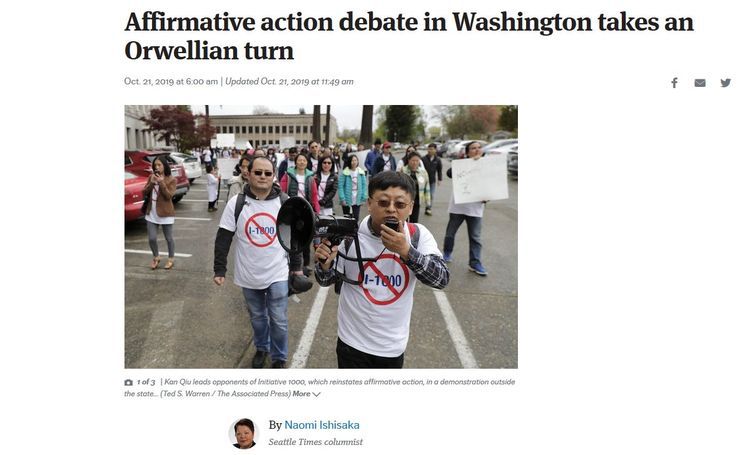 Professional People of Color Square Off vs. White-Adjacent Tiger Mothers Over Affirmative Action

There’s a fun example brewing in the State of Washington (won by Hillary 54-38) that demonstrates once again how the Democrats’ Coalition of the Margins requires constant drumming up of fear and loathing of the White Male Menace to keep their diverse coalition from being at each other’s throats. This time, blacks and Chinese are fighting over affirmative action in state college admissions.

Back in 1998 voters in the state of Washington banned affirmative action in government hiring and public universities, on the model of California’s 1996 Proposition 209. Recently, the state legislature voted in favor of a bill, I-1000, to rescind that referendum and legalize affirmative action. But then, apparently, it was noticed that they couldn’t, you know, do that, so they need a referendum to repeal the 1998 referendum.

Not surprisingly, professional People of Color are for R-88, while White-Adjacent Tiger Moms are against R-88.

In case you are wondering, the language of the pro-affirmative action I-1000 / R-88 is shameless gaslighting. From Ballotpedia:

However, affirmative action would be allowed under I-1000. I-1000 defines affirmative action as using one or more of the characteristics listed above (except sexual orientation) as factors when considering a person for education or employment opportunities.

Now, you know and I know that the legal concept of disparate or adverse discrimination doesn’t say disparate discrimination is okay as long as the factor that causes one race to benefit over the other isn’t the “sole factor.”

Like many Asian Americans growing up in Seattle’s civil-rights circles in the 1980s, I looked up to the “Four Amigos” as a powerful model of solidarity and activism.

Native leader Bernie Whitebear, Latinx leader Roberto Maestas, Asian American leader Uncle Bob Santos and African American leader Larry Gossett — each legends in their own right — modeled cross-racial organizing that emphasized we were stronger when we looked beyond our own self-interest and thought about the interests of all. From the 1960s on, they taught us that while communities had different struggles, histories and needs, only through multiethnic solidarity could we right wrongs and raise the tide for every boat.

I.e., Unite to Fight the White.

It was within this context that I was, perhaps foolishly, surprised, confused and discouraged to see that the face of the campaign to reject affirmative action by voting no on Referendum 88 was nearly all Asian American.

Led by Eastside residents Kan Qiu and Linda Yang under the name Washington Asians for Equality, the no on R-88 campaign brought hundreds of Chinese Americans to Olympia to lobby against Initiative 1000 in the spring. The no on R-88 campaign seeks to overturn I-1000, which was passed this year by the Legislature to help women and people of color gain access to public education and public employment in Washington.

The campaign uses Orwellian language to call equity efforts “systemic racism” and “racial profiling.” In testimony on the initiative in April, Yang said, “I-1000 would legalize racial discrimination and penalize hardworking Asians by our skin color. At its core, it would allow less-qualified applicants to be selected based on race.” In his testimony, Qiu invoked not just parallels to the Chinese Exclusion Act but the genocide of the Khmer Rouge and Nazi Germany as examples of similarly disastrous government “solutions.”

It is appalling and ahistorical to conflate a codified system of racial apartheid that was upheld through terror, with an effort to create economic and educational opportunities for historically marginalized groups.

April Sims, secretary-treasurer of the Washington State Labor Council and a co-chair of the Washington Fairness I-1000 campaign, found Qiu’s remarks offensive. “[It] discounts the real sacrifice that folks made to pass the Civil Rights Act and to overturn those Jim Crow laws, folks that died. The folks that were lynched during the Jim Crow era.” Sims’ own family fled the South to escape the violence of the time. Sims said the divide-and-conquer tactics aren’t new, but they are nonetheless disheartening.

Washington Asians for Equality is part of a national political trend of the emerging Chinese American right wing. Using the digital platform WeChat, users can quickly spread information and organize support. From online bullying to direct confrontation, Washington Asians for Equality aggressively attacks any who oppose them — usually by calling their opponents racist and supporters of discrimination.