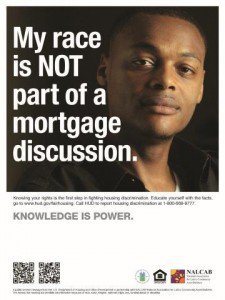 ("Disparate impact" is a legal theory that assumes discrimination when blacks are disproportionately negatively affected by something—even if there is no proof of bias or discrimination. For an overview see Disparate Impact: Legal And Political By James Fulford.)

But Texas argues that this solution creates another raft of problems—forced racial quotas, for one. Bankers, meanwhile, say that the pressure of "disparate impact" litigation forces them to lower lending standards for blacks and Hispanics—which then opens them up to charges of predatory lending. And, you know, economic collapse a la 2008.

How the plaintiff—Inclusive Communities, a Dallas non-profit—got standing is not clear to me, but it claims to want more low-income housing in white neighborhoods, and says Texas' actions hamper that goal.

Two notes. One, disparate impact is terrible policy because it assumes non-existent racial equality. Blacks have lower incomes, fewer assets and bad credit because they're generally less intelligent, less hard-working, more dismissive of repayment schedules and more prone to credit purchases beyond their means. Whites bear the brunt in several ways—they're falsely accused of being mean racists who are unfairly withholding jobs and credit from deserving blacks, and they pay for the "equalization" fallout (example: if a company must pay all workers equally to avoid a “disparate impact” claim, whites will get less than they would have gotten otherwise).

This is not likely to show up in an amicus brief filed the by the bankers' association.

Two, if "Inclusive Communities" has standing, why not a white neighborhood association that finds itself the target of the "inclusion" crusade? People don't want to live near Section 8 housing. That's because residents are generally crappier people: more garbage, noise, crime, you name it. A more-robust freedom of association should mean that government should not be allowed to force unwanted people into a neighborhood through subsidies.

But good luck getting a white plaintiff in America to say, "I'm Archie Bunker, and I don't want blacks moving in."