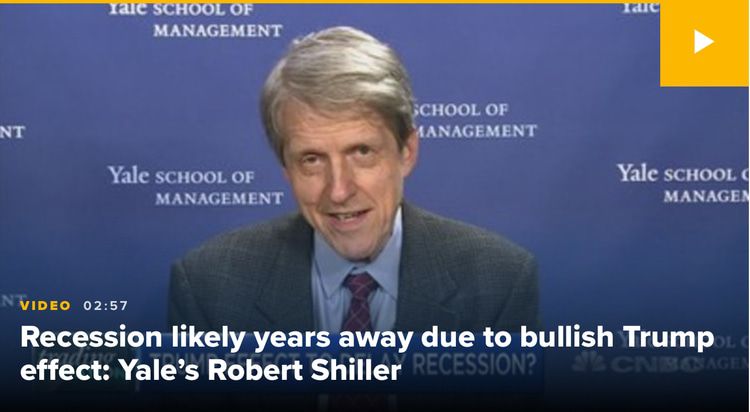 Economist Robert Shiller: Trump Is PERSONALLY Keeping a Recession Away

Nobel-prize winning economist Robert Shiller believes a recession may be years away due to a bullish Trump effect in the market.

According to the Yale University professor, President Donald Trump is creating an environment that’s conducive to strong consumer spending, and it’s a major force that should hold off a recession.

“Consumers are hanging in there. You might wonder why that would be at this time so late into the cycle. This is the longest expansion ever. Now, you can say the expansion was partly [President Barack] Obama,” he told CNBC’s “Trading Nation” on Friday. “But lingering on this long needs an explanation.”

Shiller, a behavioral finance expert who’s out with the new book “Narrative Economics,” believes Americans are still opening their wallets wide based on what President Trump exemplifies: Consumption.

“I think that [strong spending] has to do with the inspiration for many people provided by our motivational speaker president who models luxurious living,” said Shiller.

Before the markets can take-off, Shiller stresses President Trump needs to get past the impeachment inquiry. He sees this as the biggest threat to his optimistic forecast.

“If he survives that, he might contribute for some time in boosting the market,” said Shiller. “We’re maybe in the Trump era, and I think that Donald Trump by inspiration had an effect on the market — not just tax cutting.”

This reminds me of why I gave up on having macroeconomic opinions.